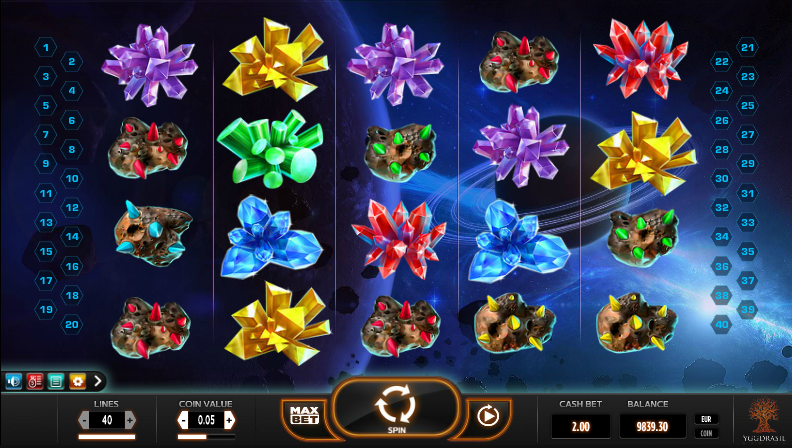 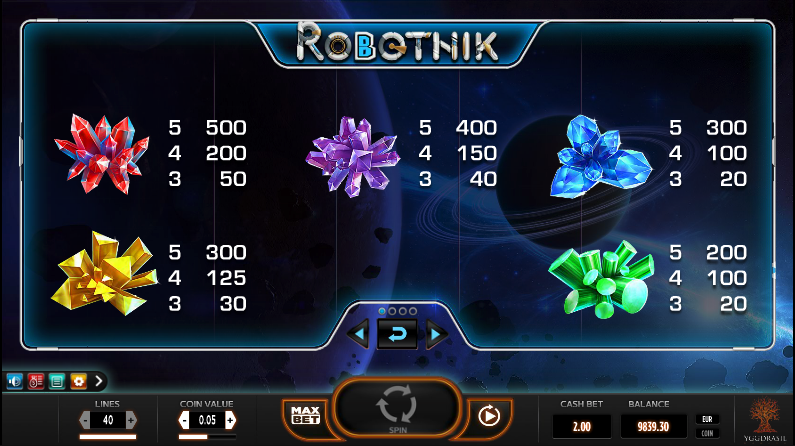 Vast planets in some distant solar system appear to be the location for this very good looking online slot from Yggdrasil Gaming. It’s called Robotnik and that’s a title which seems to belittle the scale of the landscape on show here. It’s very firmly a science fiction-themed game with a clever base game feature which involves the aforementioned Robotnik. Read our review below for all the important details.

Robotnik is a five reel slot with four rows and forty fixed paylines; as we’ve already mentioned the backdrop to those transparent reels looks great with a ringed planet orbiting a much larger one – both are illuminated by a distant binary star.

There are five high value symbols represented by minerals of different colours – red, purple, blue, yellow and green; the lower values are five rocks with those same minerals as yet un-mined.

There are two wild symbols, a normal one and a 3x multiplier one which are described in more detail below.

At any stage during normal play wilds or 3x wilds may appear on the reels (they can also appear stacked). After any wins are paid you will receive a free respin with those wilds held in place. The really good news is that if more wilds appear during the respin you’ll get another spin and this process continues until no new wilds land on the reels.

If the wild wins include the 3x wild then any wins will obviously be multiplied by three.

Robotnik is a little robot who can float onto the reels during or after a spin and when he does so he will distribute wilds and 3x wilds as he goes. This is really an extra way of adding wilds for you and the outcome is the same regarding free extra spins.

Robotnik looks absolutely fantastic and the gameplay complements those looks very well. It’s the sort of game which makes you want to set the Autoplay, sit back and watch the reels spin – the sound effects aren’t bad either and there’s an RTP of 96.70%.