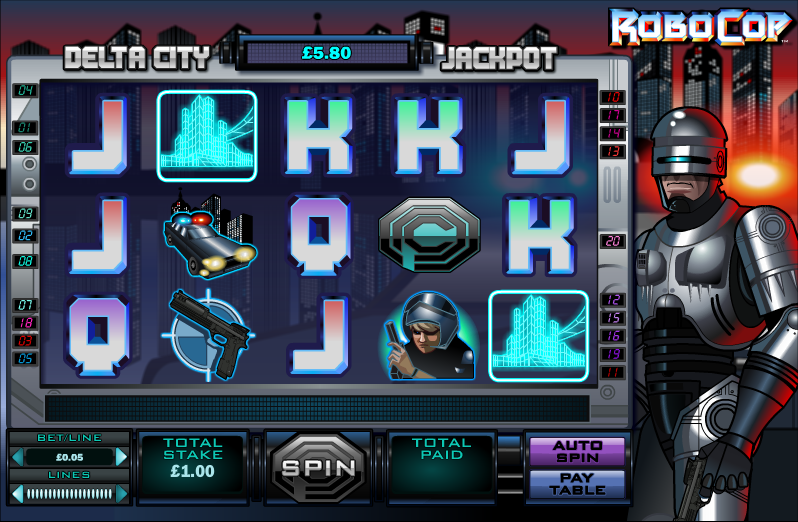 Never mind the 2014 version of this film,  the 1987 movie Robocop was the original and the best and it spawned a legacy which is still felt today. Basing an online slot machine on a sci-fi premise always seems to us like a good idea and Fremantle Media have come up with the goods here. Keep reading to find out more about this robotic lawmaker.

Robocop plays out over five reels and twenty paylines and although it looks a little dated compared to some newer games, it has a suitably mechanical and urban atmosphere. The backdrop to the reels is a nighttime cityscape with our semi-human hero watching us from the right hand side.

The basic symbols are represented by the J, Q, K and A but the higher values are more exciting and include a police car, a gun, Robocop’s female partner, the other automated robot from the movie, the Robocop logo and the half-man himself.

A set of three target’s is the basic wild symbol and there’s also a Prime Directive wild which only appears on reel three; if you land it there it may add additional, random wilds to the reels.

The OCP symbol is the scatter and then there are two symbols which are associated with the jackpot, a Delta City icon and a grid view of skyscrapers of which more below.

There’s a counter above the reels which shows the current level of the jackpot and this amount is increase every time you land one of the grid view scatters anywhere on the reels. The greater amounts will be added by landing more per spin.

The jackpot is won by landing 5 of the Delta City symbols on a winning payline.

Land three or more of the OCP symbols anywhere on the reels to kick this feature off. You will now get the chance to shoot your way through four levels of bad guys. It’s interactive and you must use the mouse button to shoot baddies. If you get shot you will lose energy and if you run out of energy that’s the game over. The further you get the more prizes you will win.

If you’re trying to win the Delta City jackpot then play with maximum paylines as you need to get those Delta City symbols on an active payline.

What’s not to like about this slot? A great soundtrack, decent graphics and animations and some creative bonus features mean this is one that everybody will enjoy.