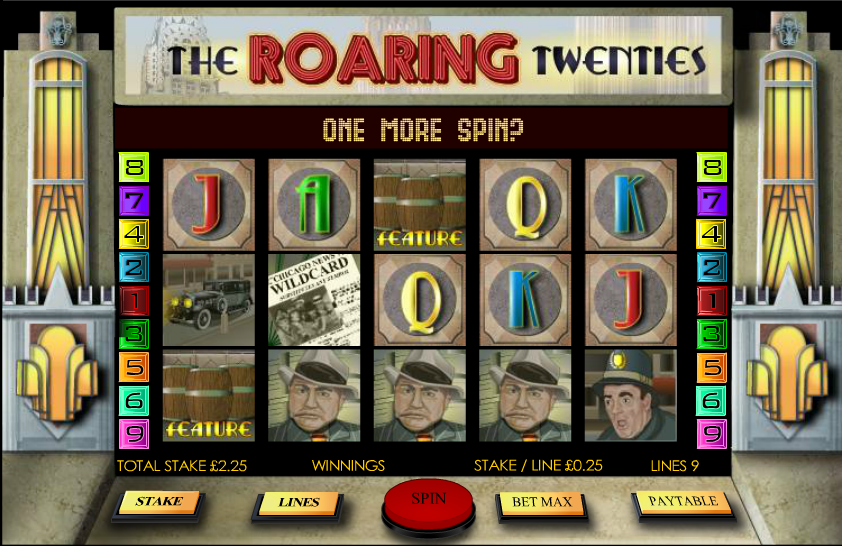 Of all the ideas that might have seemed like a good idea at the time, prohibition turned out to be one of the real clunkers; lasting from 1920 to 1933, sales and manufacture of alcohol were completely banned in the United States and of course a whole illegal industry grew up to replace the outlawed one. Openbet have used that premise when creating The Roaring Twenties, an online slot set firmly in 1920s America.

The Roaring Twenties features five reels and nine paylines and it’s got a fantastic art deco look which marks it out as a game of it’s time. Stained glass windows occupy the space on either side of the reels and all the symbols are designed in the same manner.

They include the usual J, Q, K and A but in an art deco style; the more valuable ones are a big, black saloon car, a dancing couple, a policeman and a character who is clearly a gangster.

The wild symbol is represented by a newspaper headline and the barrels of booze is the bonus symbol which activates the main feature.

This is the game’s only bonus feature and although there’s not much to it, it’s quite entertaining. To trigger it you will have to land at least three of the barrel symbols anywhere on an active payline – they do not have to start on the leftmost reel. The wild is also able to substitute for the bonus symbol so it appears to get triggered fairly regularly.

When the mini-game starts you will be in a cellar faced with a number of barrels of alcohol; click them one by one and the policeman will walk up and smash then with an axe, increasing the multiplier with each success. The round ends when you strike the booby trapped barrel.

Keep those paylines maxed out for the best chance of triggering the feature – you have to land the bonus symbols on an active payline to activate it.

This is a nice enough game and it’s strength is that it looks really good; there’s a slight lack of bonus features so if you’re heading here in the execration of lots of extras, you’re in the wrong place.