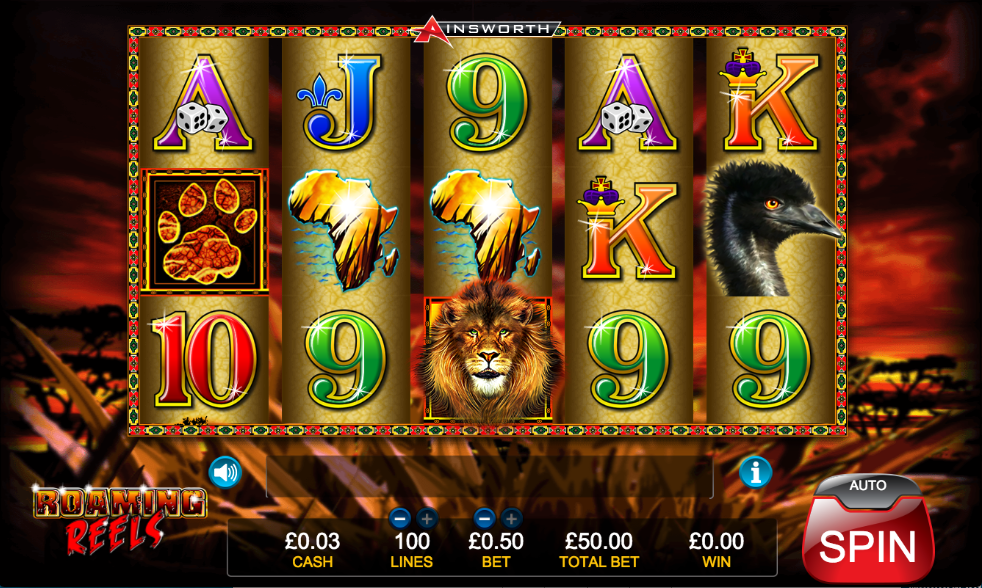 The dusty savannahs of Africa are once again our exotic virtual destination as we check out this online slot machine from Ainsworth Gaming; it’s called Roaming Reels and it combines some traditional fruit machine-type sound effects with a tasty free spins round – find out all about it here.

Roaming Reels is a five reel slot with three rows and up to one hundred paylines – these can be adjusted using the ‘+’ and ‘-‘ buttons below the reels; those reels are retained within an ornate, tribal frame which floats against a backdrop of the flat African landscape at sunset.

The higher valuer symbols include a map of Africa, a zebra, an emu, an ibex and a paw print; 9, 10, J, Q, K and A represent the lower values.

The lion is of course wild, he appears only on reels three, four or five in the base game and he will substitute for all others to help form winning combos except for the scatter symbol which is a baobab tree silhouetted against a setting sun.

This is triggered by landing three or more of the baobab tree scatter symbols anywhere in view for which you will receive the following:

The wild lion will now appear only on reels one, three and five and the good news is that more spins can be triggered by landing at least three more scatter symbols during this round

Roaming Reels is rather a basic slot but it does what is says on the tin in a way unique to Ainsworth – if you like their other games then you’ll like this but otherwise there’s not a great deal to keep you playing. It comes with an RTP of 94.14%.