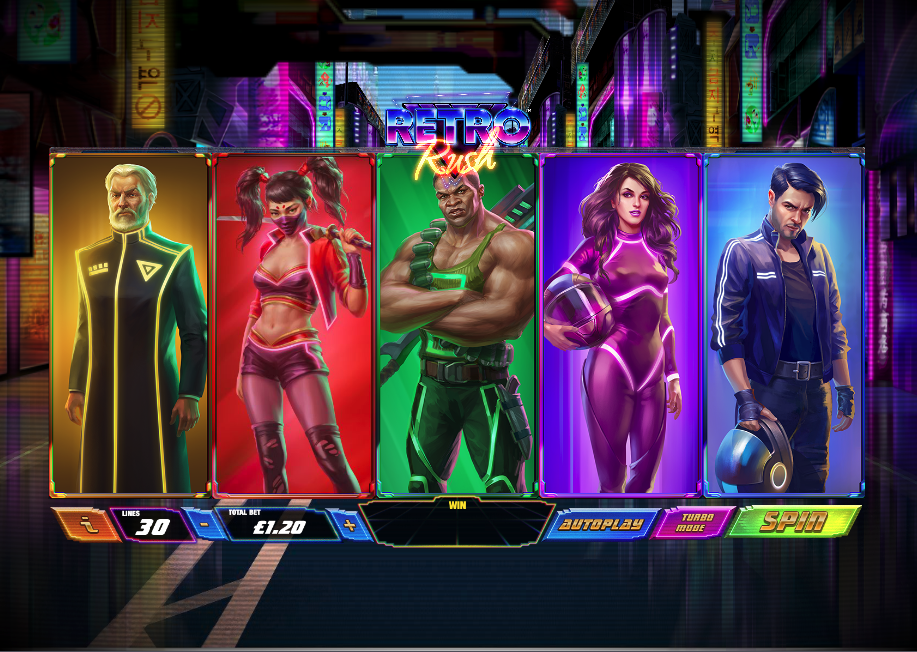 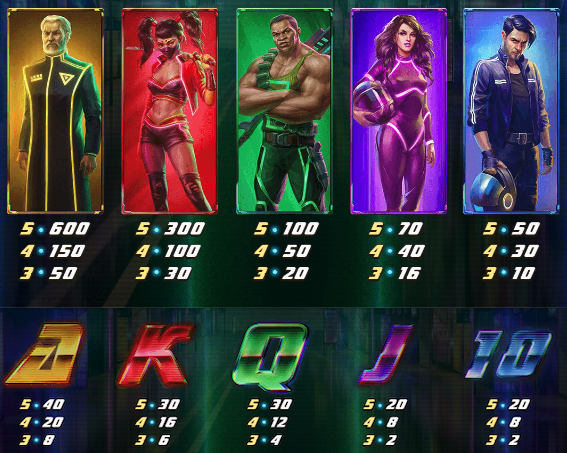 Some time in the near future and on the roads of a neon-lit city a group of daring street racers challenge each other – that’s the narrative behind Retro Rush, this online slot machine from Playtech which offers players Sticky Wins, multiplier wild symbols and free spins with expanded paylines.

Retro Rush is a five reel slot with three rows and thirty paylines in the base game; the reel-spinning action all takes place against a backdrop of movement through the damp streets of this unnamed city, lit by the signs stretching from round level to their respective roofs.

The high value symbols are the five characters from this story – four racers and the serious-looking chap who perhaps finances these affairs; 10, J, Q, K and A represent the lower values.

The scatter symbol is the box of takeaway Chinese food and it appears only on reels two, three and four.

Every symbol involved in a win in the base game will stick in place and the the reels will be respun – any symbols adding to the wins will mean another respin and this process continues until there are no more wins.

On the first, second and fourth respins wild symbol can appear and they will contain multipliers of 2x, 3x and 5x respectively.

Landing three of the takeaway box scatter symbols anywhere on reels two, three and four will award five free spins; during this round the reels extend to six rows, increasing the number of paylines to sixty and a new wild symbol is in play – the silhouetted girl who’s tall enough to fill up an entire reel and she’s created whenever a regular wild lands. It’s not possible to trigger any more spins from within this round.

Retro Rush is a slot which certainly has a retro feel to it but it also takes us a few years into the future to mix up the themes a little; it’s enjoyable stuff though with the Sticky Wins hitting regularly and a synthesizer soundtrack to keep the action speeding along at a tasty pace.