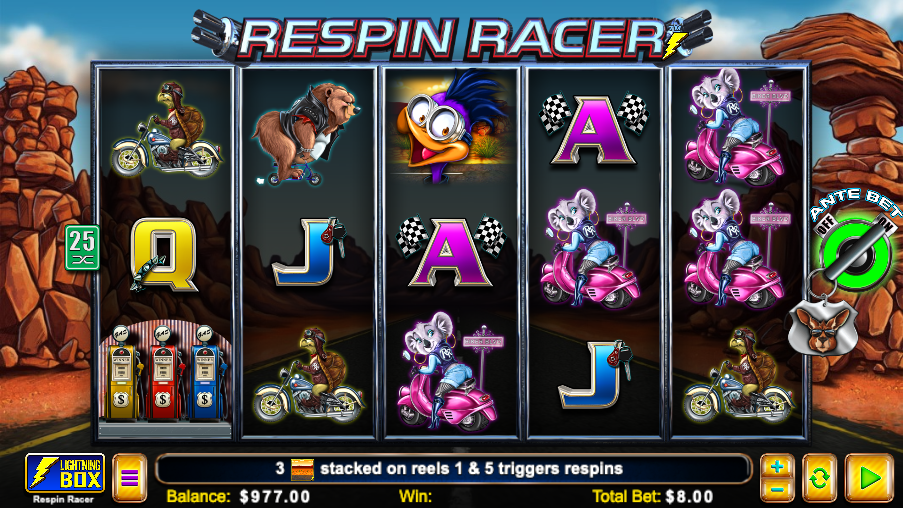 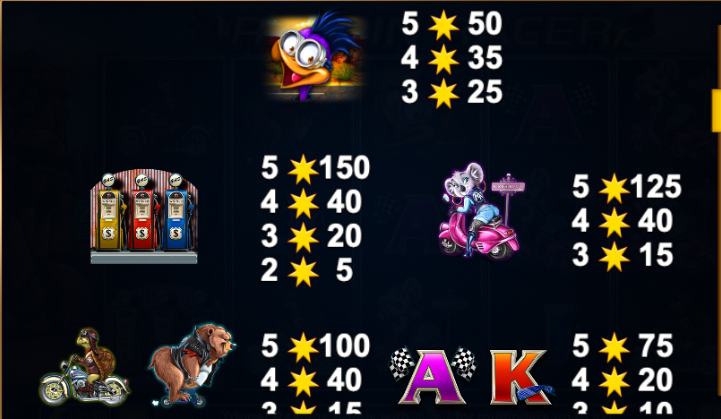 If you’ve previously enjoyed an online slot called Respin Rhino from Lightning Box Games then you’ll be pleased to hear that there’s a sequel of sorts in the shape of Respin Racer – it builds on its predecessor’s features with an Ante Bet option which allows players to pay a little more for a little extra.

Respin Racer is a five reel slot with three rows and twenty five fixed paylines; the narrative is of a motor race in the desert between various animals riding and driving an assortment of vehicles with free spins as the prize.

The high value symbols include a roadrunner character, some petrol pumps, a mouse on a pink moped, a tortoise on a motorbike and a bear on a tricycle; 10, J, Q, K and A make up the lower values.

The kangaroo on the chopper is wild, he appears on reels two and four and he’ll replace all standard symbols to help create winning combinations – he also expands to fill all positions on his reel.

When spinning those reels you’ll notice that some symbols on reels one and five have a gold background and landing six matching gold symbols there will trigger this feature. Reels one and five will now lock in place and the remaining reels will spin three times although each wild symbol will also lock in place and reset the spins to three again (a maximum of nine spin is possible).

If the respins are triggered with gold roadrunners then multipliers of 2x and 3x can be applied to any wins.

Using the Ante Bet option will increase your stake by 60%, it will add the expanding wild to reel three and it will increase the possible maximum spins in the feature to twelve.

Respin Racer is an enjoyable, updated version of Respin Rhino, the graphics are cute but perhaps not state of the art and there’s a ctachy soundtrack to keep things moving along. The Ante Bet is a nice touch but it will only increase the RTP from 95.43% – 95.83%.