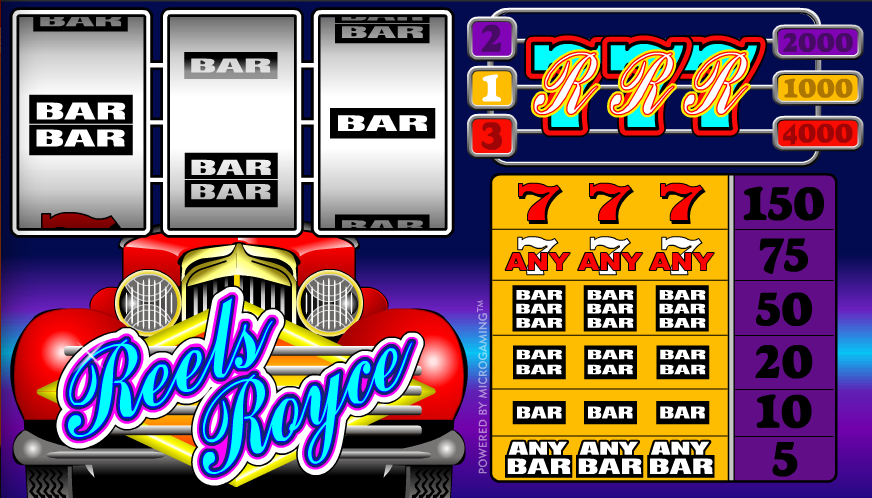 On the 15th March 1906, quite possibly the world’s most famous luxury car brand began life in Manchester. Rolls-Royce was the result of a partnership between Charles Stewart Rolls and Frederick Henry Royce and more than 100 years later this company is still producing incredible automobiles. Reels Royce is an online slot machine loosely based on their good name and it’s from Microgaming.

Reels Royce plays out over three reels and three paylines and it’s fair to say that this game doesn’t really convey the impression of money and luxury exhibited by a Rolls-Royce car. The hope here is that if you can bag yourself a big enough win you might be able to add to your luxury car fund.

The reels are in the top left hand corner underneath which is a model of car we think is some sort of Phantom with the wide wings and large headlights. The paytable on the right hand side displays all the symbols which include single/double/triple bars, red sevens and blue sevens.

The blues sevens have the swirly ‘R’ logo superimposed and are worth up to 4000x your line stake for three on an active payline.

Matching symbols on an active payline aren’t the only way to win; the following extra methods are available:

Use the plus and minus buttons at the bottom of the screen to choose your stake per line (£0.25 – £5.00) after which you can select the number of paylines up to three. This gives a betting range of £0.25 – £15.00. The choice is of course yours but the 4000x jackpot prize is only available on payline three which can only activated after paylines one and two.

Reels Royce is similar in design to slots such as Gladiator’s Gold, only the theme is different. Still, it’s a fast-moving game and worth checking out, even if it’s a bit basic.