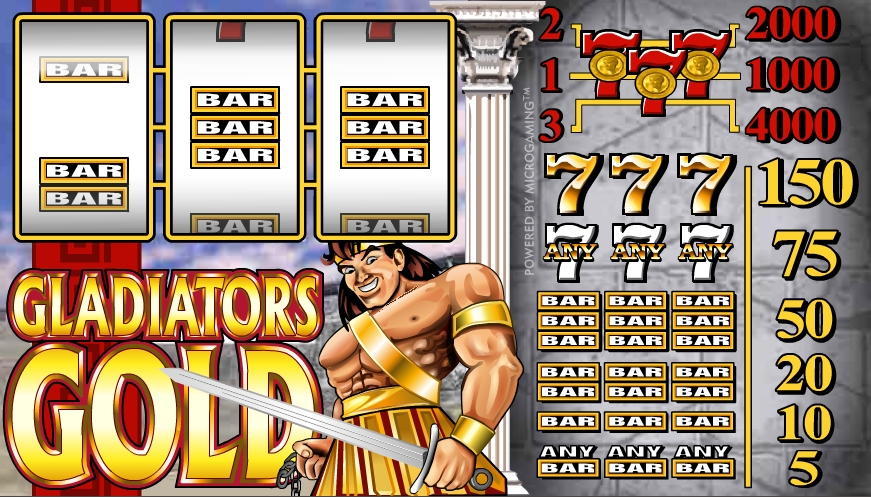 It’s easy to argue that the life of a Roman gladiator was not a pleasant one; these warriors largely began their lives as slaves and entertained huge audiences in mortal combat against criminals, large animals and each other. No luxuries were afforded these fighters but perhaps they would have been marginally comforted by the knowledge that some 2000 years later, a three reel slot would be produced in their honour. This one is from Microgaming and it’s called Gladiator’s Gold.

Gladiator’s Gold is a three reel slot with three paylines and our cheerful-looking warrior can be seem posing below the reels, clad in gold livery and clutching a sword in one hand and some sort of chain weapon in the other. The paytable occupies the right hand side of the screen and displays the symbols which include single/double/triple bars and gold and red sevens.

The red sevens have a gold coin attached and are the most valuable symbol on the reels, worth up to 4000x your line stake for three on an active payline.

Aside from the basic winning combos of three matching symbols it’s also possible to win in the following ways:

Get things started by selecting your stake; use the ‘+’ and ‘-‘ buttons at the bottom of the screen to set the wager per line and then decide how many of the three paylines you would like active. This gives a betting range of £0.25 – £15.00.

There’s an incentive here to playing with three paylines because the highest payout of 4000x your line stake can only be won on payline three. You can only activate this one by having one and two active also. The minimum bet for all three lines would therefore be £0.75.

Gladiator’s Gold seems a little dated now in terms of graphics and animations but as far as classic slots go it mostly does the business – you spin the reels and you hope to win money. Worth a few minutes of your time.