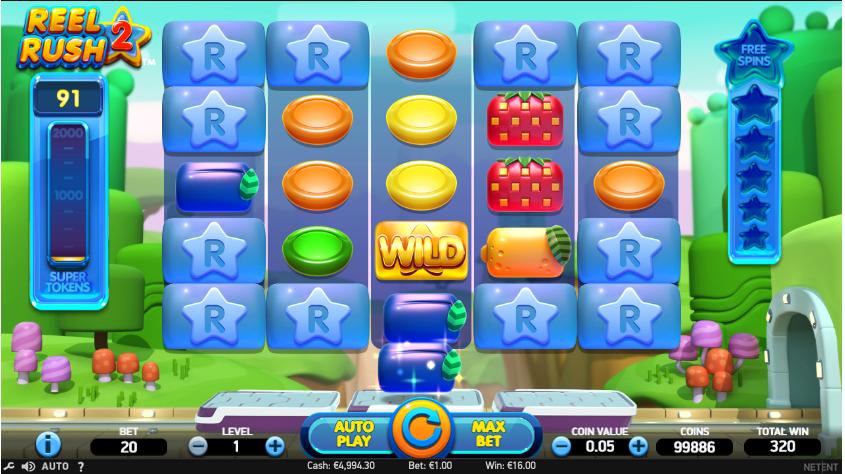 If you’ve previously enjoyed Net Entertainment’s classic Reel Rush online slot then you’ll be pleased to hear that Reel Rush 2 has arrived; it retains the same design as the original but adds several new bonus features in to the mix to increase the fruit and gem based excitement.

Reel Rush is a five reel slot with five rows and an initial 45 paylines; the basic gameplay remains the same with reel positions unlocked as you land subsequent wins – after six wins the number of paylines will have increased to 3125.

Six pieces of blocky fruit represent the higher value symbols and they are strawberries, pineapples, oranges, watermelons, grapes and blueberries; gems in red, orange, yellow, green and purple make up the lower values.

The wild is a gole ‘Wild’ which appears everywhere except on reel one and it will replace all other symbols to help create winning matches.

Unlike the original Reel Rush there are loads of mini-features that occur randomly in the base game, initiated by the sliders which appear beneath the reels:

Every two blocks cleared within a sequence adds one star to the meter on the right hand side – when this meter fills up and all blocks are cleared the free spins are triggered. Before this round starts you’ll be asked if you want to gamble your collected Super Tokens for a chance to play Super Free Spins – the more tokers you’ve collected, the better chance of winning that wager.Tokens are awarded randomly, by clearing blocks or by purchase before the free spins start.

If you’ve managed to trigger Super Free Spins then all wins will be multiplied by the Progressive Multiplier value to the right of the reels – this increases with each win. The standard free spins are played without this multiplier.

Reel Rush was always a popular and enjoyable slot but this sequel adds loads more features and variety into the fruity mix; it’s an all-action game and a worthy successor to the original.