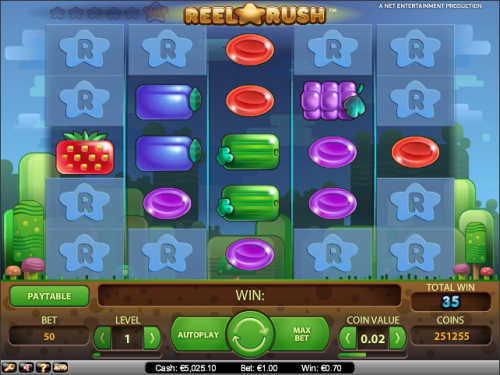 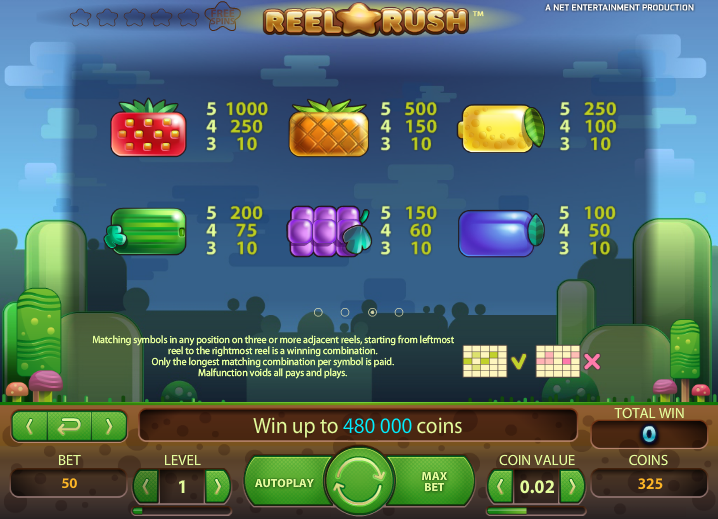 Whisper it quietly but we may have a new favourite online slot machine; we’re well aware that Net Entertainment has a track record of producing arguably the best looking slots around and Reel Rush just adds to that glowing reputation.

Before we talk about the game just have a quick look at the background scenery; if thats not a tip of the hat to Nintendo’s Mario World then we don’t know what is.  This slot features five reels and a possible 3125 ways to win when the free spins are enabled but more about those spins a little later.

The symbols all look like sweets (candy) with the lower value ones represented by the smaller ones; the higher value ones are the same colour but bigger – purple, green, yellow, orange and red.  There’s a brown wild symbol reminiscent of a Mario World star.

Reel Rush almost plays as one giant bonus game and when you start playing you’ll notice that only 13 symbols are visible on the reels; the remaining ones are marked with an ‘R’.

As you begin to play the game you’ll see that with each win, two of the ‘R’ symbols are scratched away; each consecutive win will scratch two more away, each time increasing the chances of a win on the next spin.  If you fail to land a win the screen will revert to it’s starting set-up.

With each consecutive win you’ll notice that a row of six stars above the reels will fill up one by one – reach the sixth one and not only will the screen be cleared of R’s but you’ll also get eight free spins into the bargain.  You can see this process in the video below.

So that’s the entire game but don’t let it’s lack of features put you off; this is an absolutely enchanting slot with a retro video game-style soundtrack.  You may think you’ll just dip into it for a few minutes but if you’re like us you’ll be drawn in by it’s charm and playability.