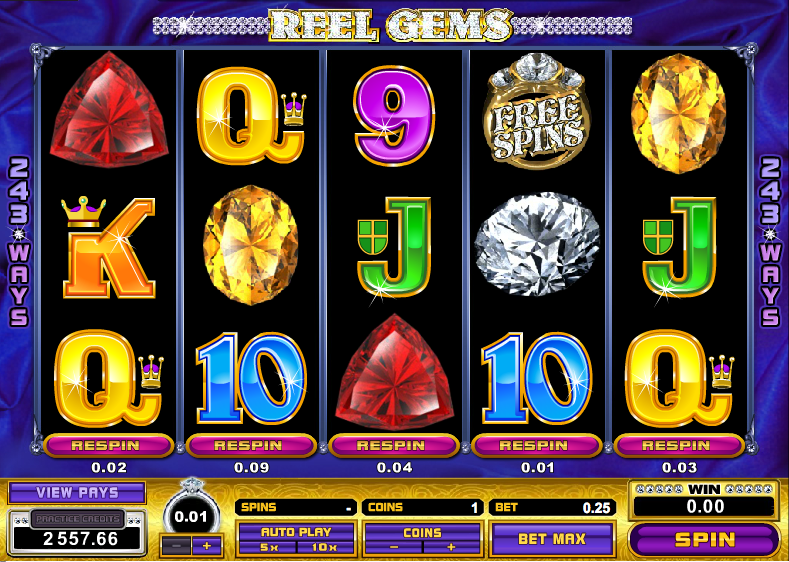 Some five reel online slots are more complex and interesting than others and it’s fair to say that at first glance, Microgaming’s Reel Gems is not one of the more appealing-looking.  As the title would suggest it’s all based on precious stones and this slot certainly fits into our luxury category.  It also features Microgaming’s interesting respin feature so it’s well worth checking out.

There are 243 ways to win spread over five reels and that means that the standard payline structure is dispensed with; it’s possible to win here just by landing matching symbols in adjacent reels.  The main symbols themselves are rather humdrum – five big gems of different colours – although they are nice and sparkly.

Special symbols include a Reel Gems wild which appears only on reels two and four and a diamond ring symbol which triggers the feature.  Low value symbols are the 9, 10, J, Q, K and A, poshed up a bit to match the gems.

Fifteen free spins are available in Reel Gems and to trigger them what you’ll have to is land three, four or five of the big diamond ring scatter symbols anywhere on the reels.

That’s not a bad start but there’s more – all wins landed during this feature will be tripled and it’s also possible to re-trigger more spins from within this round.

Microgaming’s respin feature is an interesting innovation which allows the player to respin any single reel after the spin has ended; the cost of the extra spin is proportional to the size of the potential win so be aware of that.

It’s also worth noting that only wins involving the respun reel will be awarded.

Be careful with the respin feature – constantly trying to land that elusive win by respinning the same reel again and again is a surefire way to shrink your bankroll and spoil your day.  Limit yourself to one or two spins and keep an eye on the cost of that spin.

Reel Gems may look a little boring but it’s got a pretty generous free spins round and and that respins feature which can add a extra level of excitement. Try it once at least.