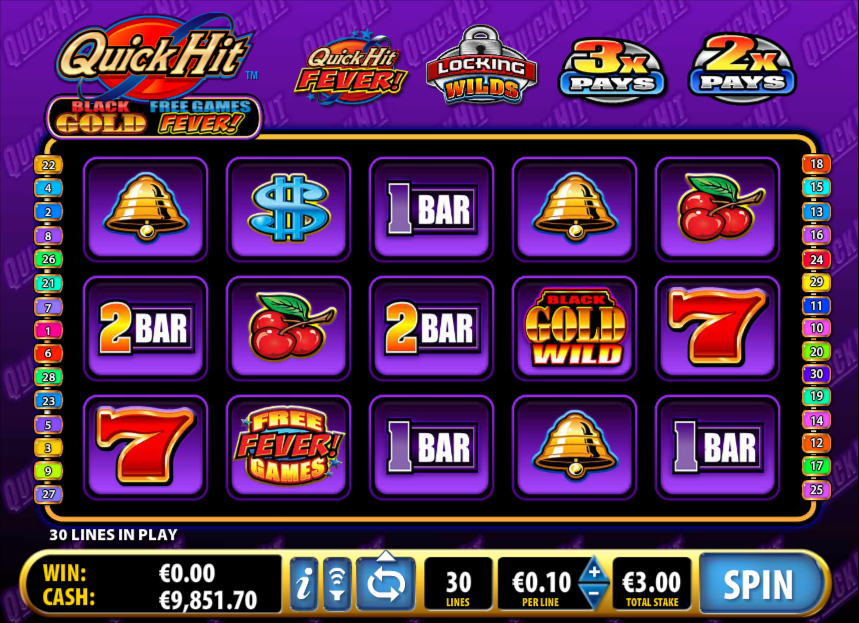 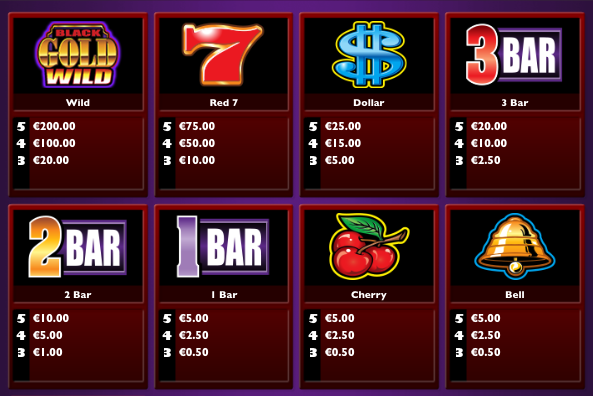 If you’re looking for an online slot with plenty of traditional symbols but lots of extra bonus features then Quick Hit Black Gold might provide the answer. It’s a conversion from a physical slot by Bally Technologies and while the look and feel of the game might be basic, there’s lots to keep players entertained.

Quick Hit is a five reel game with three rows and thirty fixed paylines. there’s no flashy backdrop to the reels, just a generally purple theme and lots of bright colours.

The symbols are mostly recognisable to players of classic slots and include bells, cherries, ‘1’, ‘2’ and ‘3’ bars, a dollar sign and red sevens.

‘Black Gold’ is wild and there are two scatters in the base game – ‘Free Games’ and ‘Quick Hit’ – which activate individual features.

These symbols appear stacked on all reels so you can land plenty at the same time. There are prizes ranging from 1x your total stake for landing three all the way up to 2500x your stake for nine.

The ‘Free Games’ symbols appears only on reels two, three and four but if you can land three anywhere in view you will trigger this feature.

You will be awarded ten free spins but first you will be faced with a screen displaying 18 tiles. Select four here until you have found three matching symbols which will determine the extra feature active during the spins:

We like the back-to-basics approach of Quick Hit and the bonus features but we’re less keen on the rather low RTP of 93.98%. Unless you can hit the free spins, a profit is unlikely here.