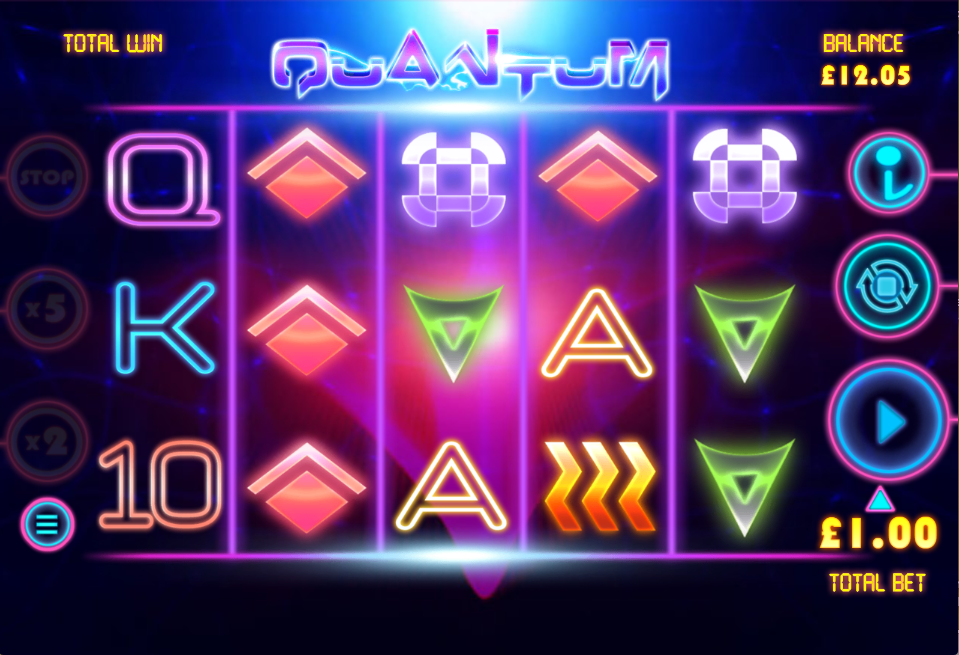 Science fiction is at the heart of this colourful online slot machine from Games Warehouse but there’s also a retro, Tron-like feel to Quantum which should appeal to a wide audience; it comes with some enhanced free spins and you can find out how it all works below.

Quantum is a five reel slot with three rows and twenty fixed paylines; there’s a funky, relaxed soundtrack to accompany your gameplay and behind those neon reels there’s a kaleidoscope of changing colours which is an attractive feature in it’s own right.

The four higher value symbols are odd geometric shapes – orange, grey, red and green – while 10, J, Q, K and A make up the lower values.

The wild is a spinning white diamond which will replace all others to help form winning combinations except for the multicolour bonus symbol.

This is a mini-feature which occurs randomly in the base game and up to three reels can become completely wild; the subsequent spin is free but the wilds can remain in place for between three and five spins after landing.

This is triggered by landing three of the multicolour bonus symbols anywhere on reels one, three and five; the number of spins you receive are unlimited but the round will be ended by landing a ‘Stop’ symbol on reel three.

Quantum is a really high quality slot from GW with some lovely graphics and an engaging soundtrack; the two bonus features are integrated well into the gameplay and seem to occur frequently enough. This game comes with an RTP of 96.00%.