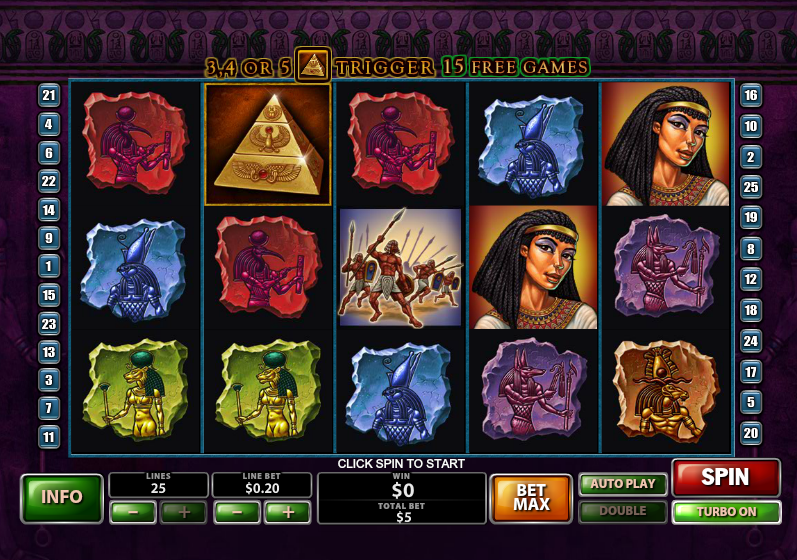 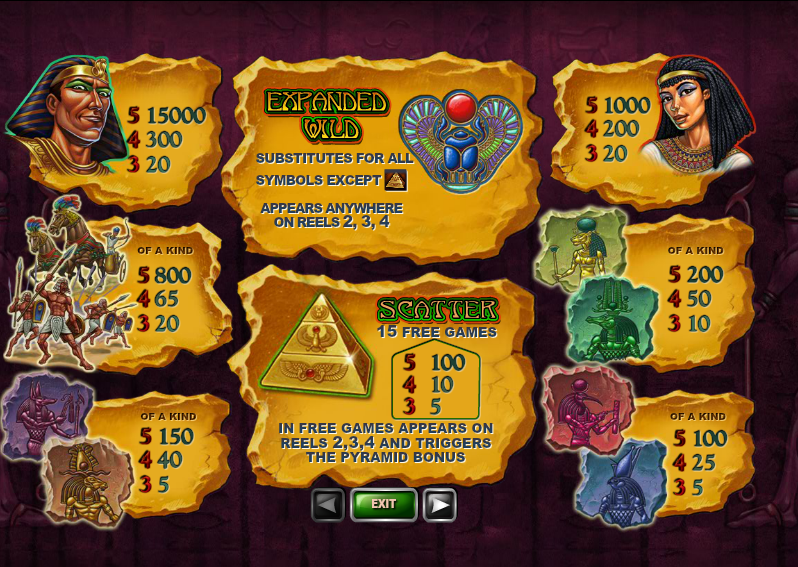 As a fan of online slots you will already know that some genres are more popular than others and that there are already plenty of Egyptian-themed games – check out our top five by clicking here. The Pyramid Of Ramesses is another addition to that list and it’s from Casino Technology, a games developer relatively new to us but not the industry. Read on to find out more.

The Pyramid Of Ramesses is a five reel slot with three rows and up to twenty five paylines; thee’s a purplish backdrop to those reels featuring some understated hieroglyphics but it’s the big colourful symbols which catch the eye.

Those symbols are all theme-related and the six lower values all feature Egyptian gods carved into roughly-hewn tablets. Higher values include Egyptian soldiers, a chariot and male and female characters (the Pharaoh and his wife perhaps?).

The spins are triggered by landing three of the pyramid scatter symbols anywhere on reels two, three and four; manage this and you will be rewarded with 15 free spins.

During this feature, landing three more pyramids will award the Pyramid Bonus. You will be shown a screen displaying the stones which make up a pyramid and you must pick one from the bottom row to reveal a prize. Work your way up the pyramid picking one stone from each row until you find the ‘Collect’ message. Make it to the top and there’s a prize of 200x your total bet waiting.

The Pyramid Of Ramesses offers a progressive jackpot which can be won by landing five of the Pharaoh symbols on an active payline. You must be playing the maximum number of lines and the prize amount will differ depending on your stake (£2, £5, £10 or £25).

Any win except the progressive jackpot can be gambled by pressing the ‘Double’ button below the reels. You can gamble all or half of your win and you just have to find one of the face down playing cards which beats the dealer.

Use the gamble feature with care, we regard it as an unnecessary risk to your bankroll.

This is a big bold game with some attractive graphics and the attraction of a progressive jackpot. Not so attractive is the pretty low RTP of 92.39% although that increases to 94.39% when qualified for the jackpot.