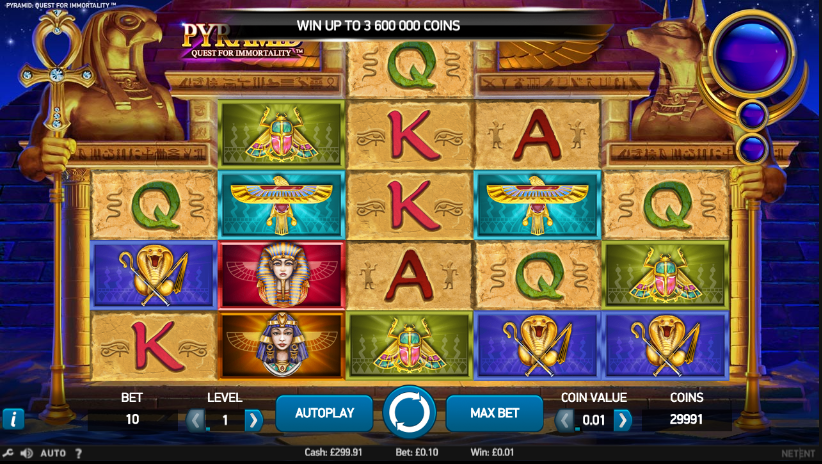 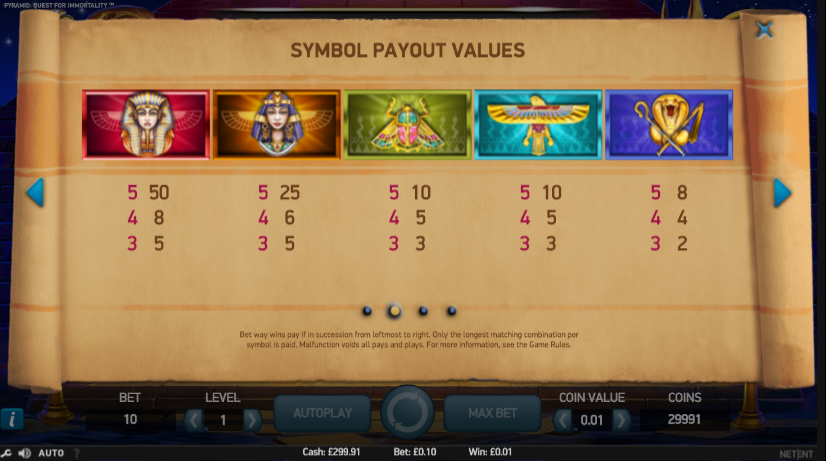 A brand new online slot from Net Entertainment is usually an occasion to be welcomed so we’re pleased to be able to bring you this review of Pyramid: Quest For Immortality – a slightly awkward title for what is in fact a top notch gaming experience. An Egyptian theme is nothing new but there’s an unusual reel structure here and some creative bonus features which lift it above the norm so carry on reading for all the essential details.

Pyramid: Quest For Immortality is a five reel slot with up to five rows and 720 ways to win; there’s no standard payline structure and a win can be formed as long as you have matching symbols in adjacent reels starting from the left hand side. Statues of Ra and Anubis (we think) watch over the reels from either side and there’s a large pyramid in the darkness behind.

The high value symbols are all Egyptian and include a sphinx, a Cleopatra mask and three other representations of deities which we can’t quite place; 10, J, Q. K and A make up the lower values. Rather than the reels spinning, blocks containing the symbols fall into place and this is a nice touch.

The wild symbol is a big golden ankh on a purple background; there are no scatter or bonus symbol.

This is a feature we always like to see and here it’s slightly reminiscent of the gameplay in Gonzo’s Quest; as the blocks fall down, those that create winning combos will crumble to dust, allowing those above to fall into their place and for more to fall in from above. This creates the potential for more wins and so the process continues.

With every three successive wins the multiplier increases by 1x up to a maximum of 10x.

As the avalanche feature occurs you will notice that three of the higher positions have a mystical blue background; any symbols involved in a winning combo in those positions will also become wild for the next spin.

Pyramid: Quest For Immortality is a fantastic addition to Net Ent’s line up and also one of the best Egyptian slots we’ve played. It’s certainly low variance but wins are extremely regular and should extend your bankroll considerably. Good stuff – and an RTP of 96.48%.