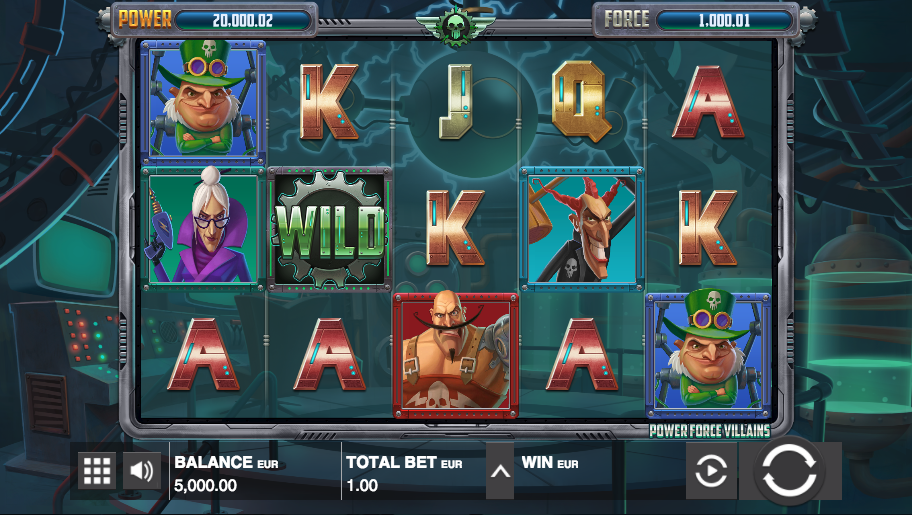 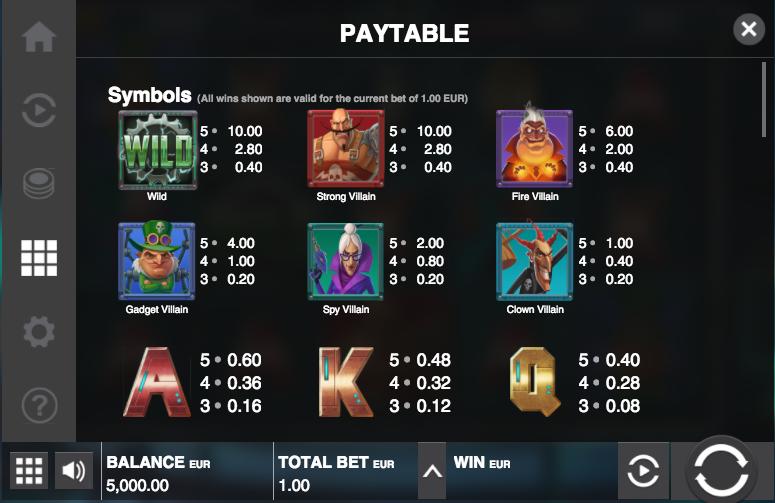 Isaac Newton once said that “to every action there is an equal and opposite or contrary, reaction”  and we’re pretty sure that he was talking about superheroes and super villains; to this end Push Gaming have developed two online slots themed on this subject – one is Power Force Heroes and the other is Power Force Villains. These two games are actually identical except for the five main characters so reading one review will put you in the picture.

Power Force Villains is a five reel slot with three rows and twenty five fixed paylines; the symbols spin on grey futuristic reels behind which we can see the dastardly laboratory which is the headquarters of our main characters.

The higher value symbols are the five main characters and they are strong villain, fire villain, gadget villain, spy villain and clown villain (who sounds like the most fun); J, Q, K and A are the lower values.

The wild symbol is a big green ‘Wild’ on an electrified cog and it will replace all others in winning combos except for the bonus icon and the silver and gold jackpot triggers.

If you’re lucky you may land a 3×3 giant symbols anywhere on the grid which should help with some big payouts.

This is all part of the free spins round and it’s initially triggered by landing all or part of the 3×3 bonus icon anywhere on the reels; each normal-seized position in view will now reveal up to three Free Spins or Super Spins.

There are two progressive jackpots to be won and these are shown above the reels; they are won in the following ways:

Power Force Villains is good fun and well worth checking out with it’s various bonus features and progressive jackpot; it also comes with an RTP of 96.72% (0.01% better than Power Force Heroes!).