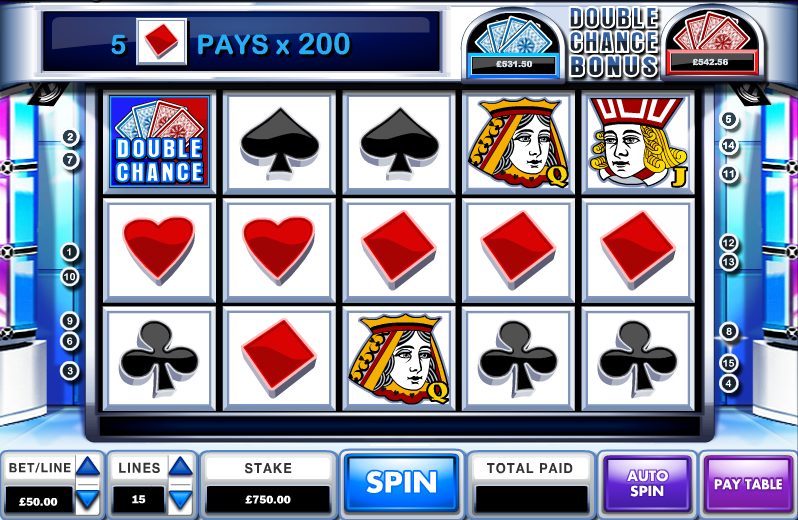 Bruce Forsyth is one of the iconic figures in British light entertainment with a long and illustrious CV behind him; he is arguably best known for fronting a television called Play Your Cards Right which began in 1980 and continues on and off until 2003. Fremantle have a proven track record of bringing classic television shows to the reels and this online slot is just one more example.

Play Your Cards Right has five reels and fifteen paylines and the main part of the television show involved contestant guessing whether the next playing card drawn would be higher or lower than the last – you can see this play out in the video below.

The reels are set within a television studio and all the symbols are playing card-related; there’s a Jack, Queen, King and then the four suits – diamonds, hearts, spades and clubs. The joker is appropriately wild, a Grand Final scatter symbol and then a Double Chance bonus symbol.

If you can land three or more of those Grand Final scatter symbols anywhere on the reels you will kick off this feature. It’s what would happen in the television show and, as you can see from the video below, your task is to work your way up the board, guessing ‘higher’ or ‘lower’ for each card. Making it to the end of each row wins you 2x,. 5x and 10x the total stake respectively.

Above the reels you will see red and blue counters containing prize amounts; each time you land one of these symbols on the reels that amount will increase.

The way to win these amounts is to land three or more of the Double Chance symbols on an active payline; you will then get to play a similar higher/lower game – firstly trying to complete a red row of cards and then, if you fail, trying the blue cards.

When playing the bonus games, take note that you can swap the first card if it’s a bad one. For example if it’s 6, 7, 8 or 9 it’s probably worth changing it to try and make your guessing easier.

This is good stuff – it sticks to the format of the show pretty well and contains what we think is the original music. Two separate bonus features add some variety to a good-looking and engaging slot.