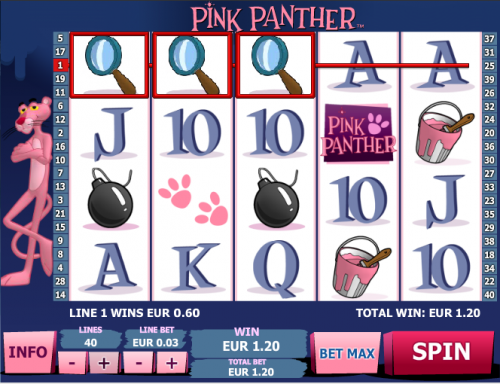 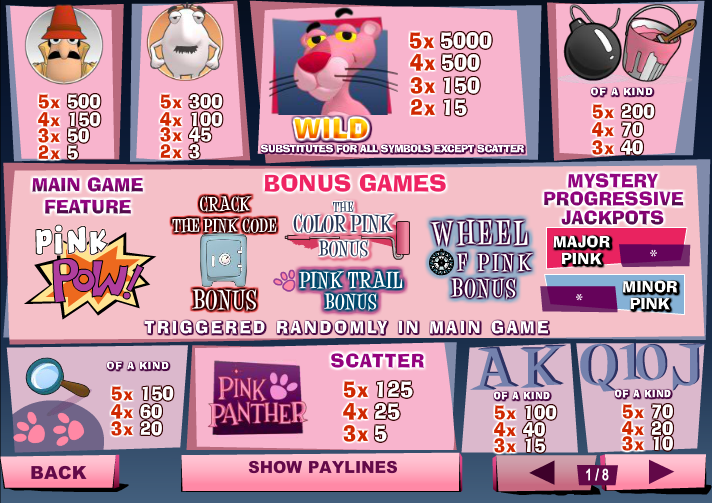 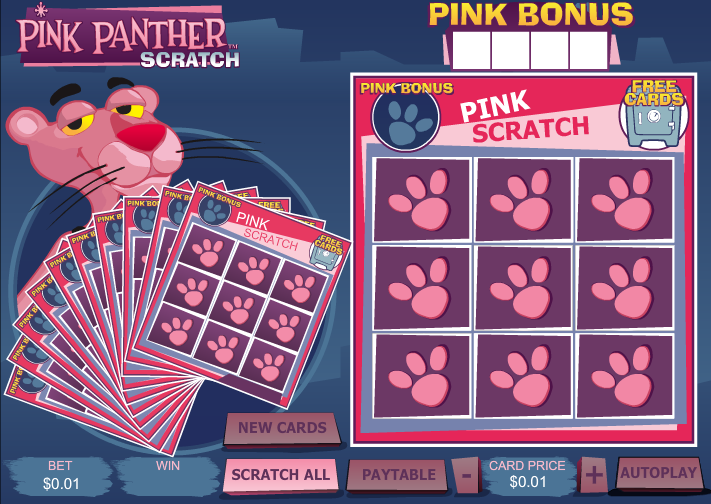 Inspector Clouseau takes the centre stage in this online slot from Playtech.  Clouseau is the bumbling French detective who solves crimes despite his ‘skills’, not because of them and he featured in several films in the 1960s with Peter Sellers as the star.

Depending how old you are, the Pink Panther may well be the cartoon character which was a spin off from the film’s opening credits but the original Pink Panther was the diamond featured in the film.

The Pink Panther features the animated character, not the diamond and it also features a soundtrack which evokes the films pretty well.  This slot has five reels and forty paylines and there’s a cartoonish feel to the game as the Pink Panther lounges to the left of the reels in front of a silhouetted city-scape. There are also two progressive jackpots if you fancy a pop at the big bucks.

10, J, Q, K and A are the lower value symbols but a range of Panther-related pictures are more valuable; these include pink paint, a comedy bomb, magnifying glass and Inspector Clouseau himself.  Special symbols are the Pink Panther wild and a paw print scatter symbol.

All the bonus features in this game are triggered randomly and while this may not be everyone’s cup of tea it makes you want to continue playing to try and trigger all five.

The Panther explodes a random of number of symbols on the reels and all these turn into wilds; the number will be between 2 and 6 and the reels will be recalculated to award any wins.

Ten safes will appear on the screen and the Panther will open them one at a time until he finds some dynamite.  Until this happens each safe will contain free spins, a multiplier of an expanding wild for reel three.  When the Panther finds the dynamite, you’ll get two more free spins which will now begin.

A slightly odd game this – the Pink Panther and the small white man paint a fence with pink and blue numbers then the pink numbers are added up and multiplied by your current bet.  You can take this prize or try again twice – you must accept the third and final amount.

Our Panther spins a wheel with an inner and outer section – the outer wheel contains numbers which represent a multiplier of the total bet and the inner wheel offers either ‘Collect’ or ‘Respin’.  The more times you land respin, the bigger your accumulated award.

Inspector Clouseau features here as he follows pink paw prints along the ground; each print wins a cash award and a certain number of prints makes up one round.  You can get Clouseau to continue to the next round but you’ll risk falling into a trap and heading back to the main game with 50% of your prize.

Getting through all four rounds wins you the diamond and a 2x multiplier.

This is where the progressive jackpot is won and there are two – Major Pink and Minor Pink. It’s randomly triggered with any stake but you’ll have a higher chance of triggering it with higher stakes.

You will be faced with 12 doors and you are trying to find five Pink Panther’s behind them for the Major Pink; five Inspector Clouseaus win the Minor Pink and three Little Men win a consolation prize.

This is a really playable slot with so many bonus games you’ll want to keep coming back to it. We also like the fact that the progressive jackpot is open to all, whichever stakes are being played.  Switch the sound on and listen to the soundtrack for maximum enjoyment.