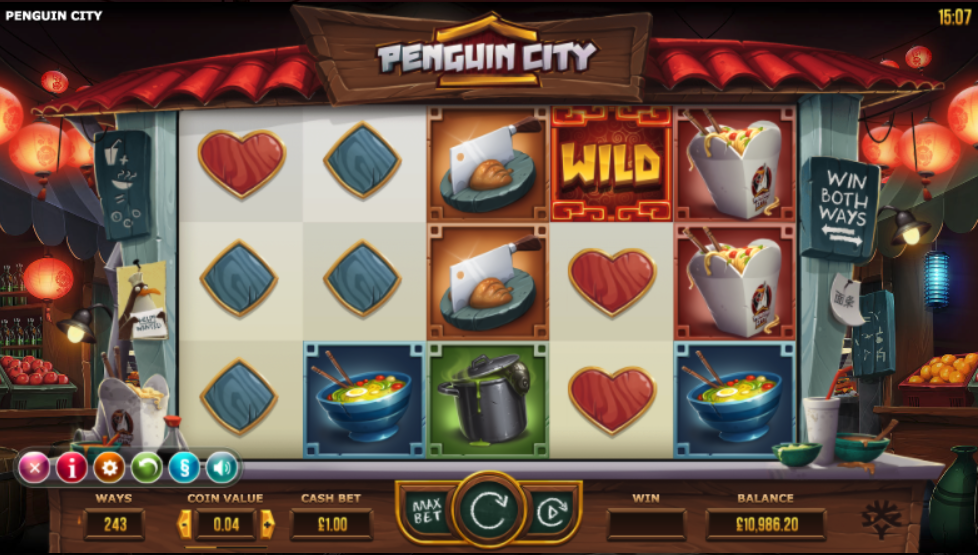 Are you familiar with Chinatown? How about a Little Tokyo or Manchester’s famous curry mile? If so then you clearly also need to check out Penguin City, a faintly oriental area of some unnamed city and coincidentally the name of this online slot from Yggdrasil Gaming which comes with wild respins and fleeing penguins.

Penguin City is a five reel slot with three rows and two hundred and forty three ways to win although wins can be formed from right to left as well as left to right; those reels spin under the Chinese eaves of a food stall with more produce and shops on show in the background.

The higher value symbols include a takeaway box, some fish sauce, a boiling pot, a bowl of soup and chopping board; playing card symbols of red, purple, green and blue represent the lower values.

The wild is a big, gold ‘Wild’ which appears only on reels two and four and which will replace all others to help form winning combinations except for the Stacked Emperor (in the feature). The wild is also the key to the main feature described below.

This is triggered each time a winning combination including a wild symbol lands in the base game; you’ll now move on to the Penguin Escape mode with that wild held in position for subsequent spins until there are no more wins.

On each spin a penguin will leap from the left hand side to try and escape – if they make it they can add an extra wild or turn a losing spin into a winning one but if they fail they’ll bounce through the hole at the bottom.

The Stacked Emperor wild also appears during this round but only on the third reel and he’ll move down one place per spin until he disappears; no penguins will attempt an escape while he’s there.

Penguin City is a slot which assails us with quite an odd theme, faintly reminiscent of the penguin olympics video game which entertained us so many years ago; it’s good fun though and it’s a high quality game in which the feature is triggered regularly for your pleasure sir (or madam of course). It comes with an RTP of 96.20%.