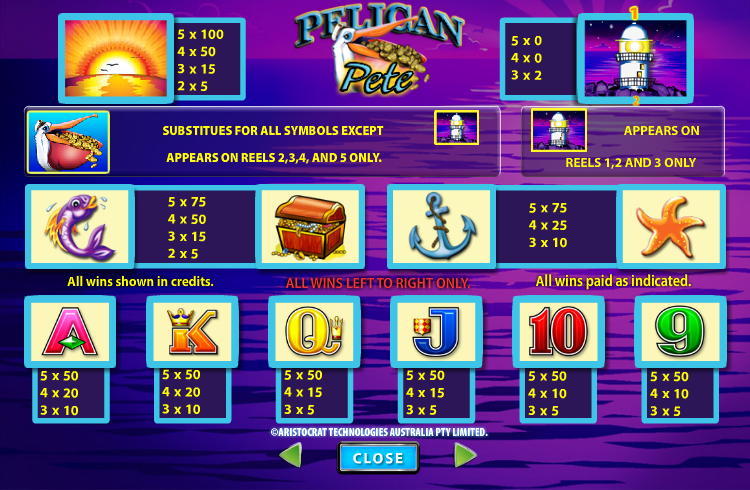 Aristocrat Leisure are a company which designs the slots you play online and those you might encounter in real life. Pelican Pete is a game which may well be familiar to those who frequent certain bricks and mortar casinos and this is the conversion for the players who prefer to spin the reels from their own devices.

Pelican Pete is a five reel slot with four rows and up to fifty paylines; the name of the game suggests that this is an aquatic affair and indeed the backdrop to the reels is a view of the ocean at sunset, glowing under a purple sky.

There are five high value nautical symbol on show including a starfish, an anchor, sunken treasure, a purple fish and a setting sun. The sun can appear stacked on the reels to offer more winning chances; additionally payouts for the fish and then can be won with just two symbols. Lower values are the usual 9, 10, J, Q, K and A.

This feature is triggered by landing three of the lighthouse symbols anywhere on reels one, two and three. You will now receive 10 free spins during which any wild Pelican Pete symbols landing will freeze in place for the rest of the spins.

If a lighthouse scatter symbol appears beneath a Pelican Pete symbol you may be awarded five more spins – this can happen only once during the feature.

If you want to gamble your most recent win just click that ‘Gamble’ button below the reels. You now have the opportunity to double or quadruple that amount by guessing the colour or suit of the next playing card drawn. You have a limit of five correct guesses.

Pelican Pete is a basic but playable online slot with a slightly jazzed-up free spins round. The RTP doesn’t seem to be listed but Aristocrat games tend to be around 95.00%. You may want to mute the rather grating sound.