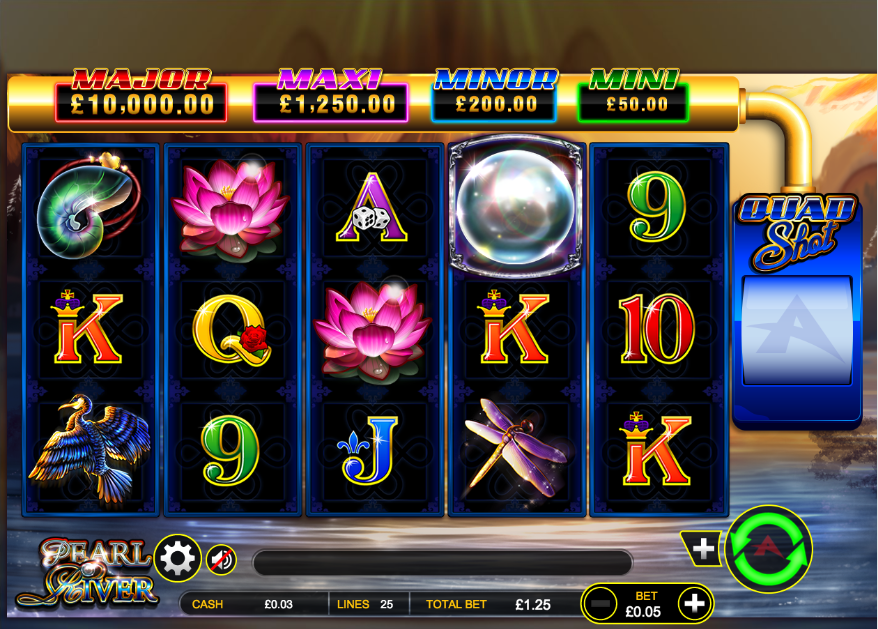 Online slots fans are no strangers to the mysteries and wonders of the Orient but there’s always another game just around the corner to take us back in that direction; this time it’s Pear River Quad Shot, a release from Ainsworth Gaming which offers plenty of wilds and a handful of free spins.

Pearl River Quad Shot is a five reel slot with three rows and twenty five fixed paylines; those reels float above the Pearl River (also known as Zhujiang) and you can see the Quad Shot reel position to the right of the reels which connects to the jackpot prizes shown at the top of the screen.

The higher value symbols include a sailing boat, a Lotus flower, a bird, a shell and a dragonfly; 9, 10, J, Q, K and A make up the lower values.

The wild is the girl with the elaborate hairdo and she will substitute for all others to help form winning combinations except for the scattered pearl.

This is triggered by landing three or more of the pearl scatter symbols anywhere in view; you will now receive ten free spins (which can’t be retriggered) on a set of reels in which the wild symbol only appears on reels two, three and four.

A bag of money appears on reels one and five during the spins and if you can land them on those reels in the same spin, three Lucky Multiplier Bonus Spins will be awarded. One the first spin a 2x multiplier wild will fill all positions on reel three, on the second spin it’s a 3x multiplier and on the third it’s a 5x multiplier.

Only the high value symbols and the wilds are in play during both free spins types.

If the Quad Shot bonus symbol lands in the little box on the right, you’ll win one of the jackpots shown above if the following is also true:

There’s plenty to like about Pearl River Quad Shot with it’s jackpot prizes and creative take on a free spins round; the sound effects are a mixture of traditional clunks and clicks and a sharp Chinese tune and there’s an RTP of 94.52%.