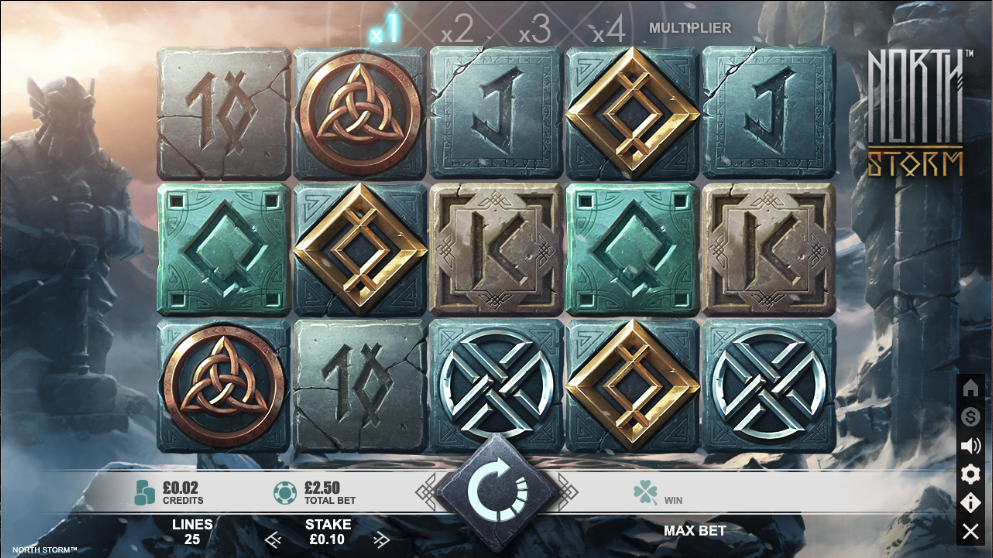 The story behind North Storm is that there’s an ancient temple somewhere in the snowy wastes of Scandinavia which is full of amazing treasure but guarded by Norse gods; your task in this online slot from Rabcat is to earn some of that loot while defeating Thor at the same time.

North Storm is a five reel slot with three rows and twenty five fixed paylines; the symbols on those reels are stone tablets blown by the chilly winds and floating in  front of this great and secret mountain fortress.

The three higher value symbols are designs carved in gold, silver and bronze while the lower values are J, Q, K and A in a runic style.

The stylised wolf’s head is wild and it will replace all standard symbols to help form winning combinations; the helmet is the bonus symbol which activates the main feature.

Also known as Cascading Reels, this feature sees any symbols in winning combos disappear to be replaced by more falling in from above; more combos can then be formed and this process continues until there are no more wins.

Eight free spins are awarded for landing three helmets on an active payline on reel one, two and three but you’ll receive two more spins for each combo on an another payline up to a maximum of twenty spins.

It’s not possible to trigger any extra free spins during this round.

North Storm is a slot designed to the usual Rabcat high standards with some amazing graphics and animations and smooth gameplay; it feels as though it fits in with a larger Norse narrative which includes slots such as Forsaken Kingdom which is also highly recommended.