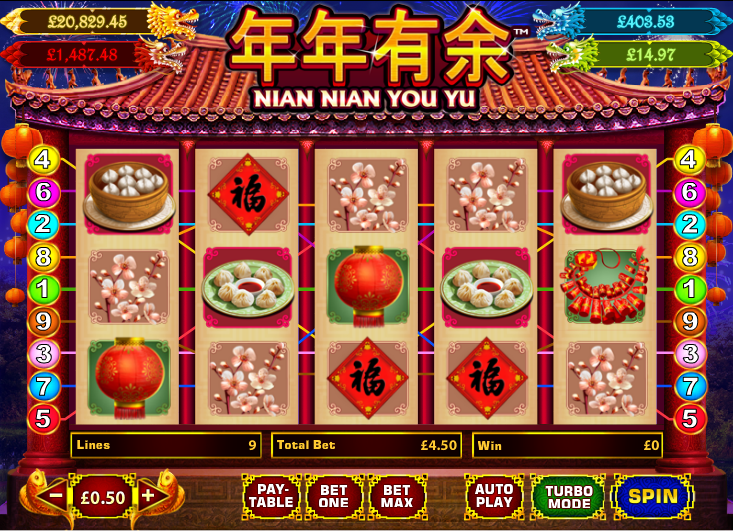 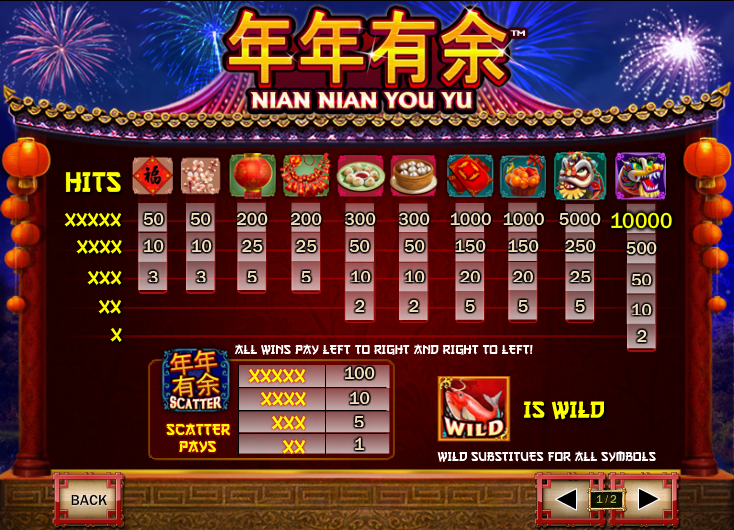 Many years of online slots experience tells us that the most popular theme is probably Oriental – the mysterious East offers lots of scope for atmosphere, bonus features and superstition. Here we have one more from Playtech and it’s called Nian Nian You Yu which translates approximately as ‘plenty of fish’. Read all about it below including the four different progressive jackpots.

Nian Nian You Yu is a five reel slot with three rows and nine fixed paylines; there’s a familiar but colourful look to the design with the reels spinning on the walls of a traditional temple, illuminated by fireworks in the background.

Despite the title there aren’t really many fish on show in this game although all the symbols are related to theme; they include Chinese characters, flowers, a Chinese lantern, firecrackers, various items of food, a table, some fruit and two ornamental dragons. The purple dragon is the most valuable symbol in the game and worth 10000x your line stake for five on an active payline.

The wild symbols is a big red Koi and the only fish on show and it will substitute for all symbols including the scatter; it appears only on reels two, three and four and it will double any wins to which it contributes. The scatter is a group of characters which translates as Nian Nian You Yu.

This is the only extra feature in the game but there are four jackpots which makes up for that lack somewhat. The feature is called the Dragon Jackpot and it’s randomly activated although the bigger the bet, the greater the chance of  triggering it.

If you are lucky enough to trigger the Dragon Jackpot the good news is that you are already guaranteed one of the amounts shown in the four boxes above the reels.

There’s a Wheel Of Fortune to spin and you must keep spinning until you have three matching colours which constitutes the jackpot you will win.

Nian Nian You Yu is a game for the progressive jackpot purists out there as it doesn’t really offer much in the way of gameplay otherwise. It looks good though and it comes with an RTP of 97.03%.