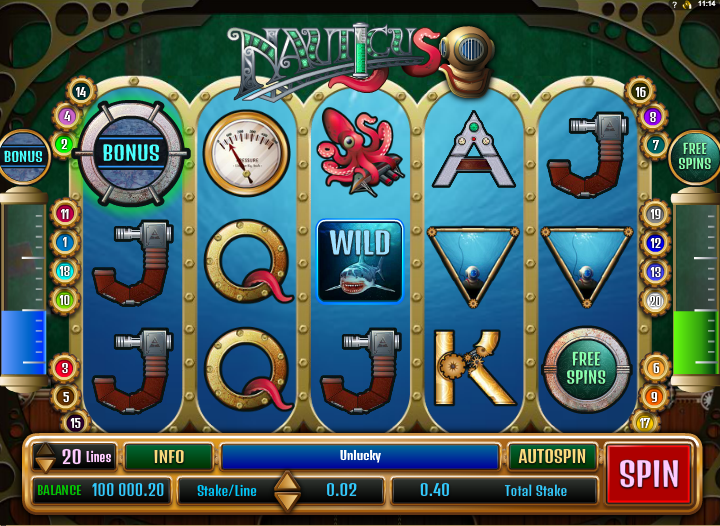 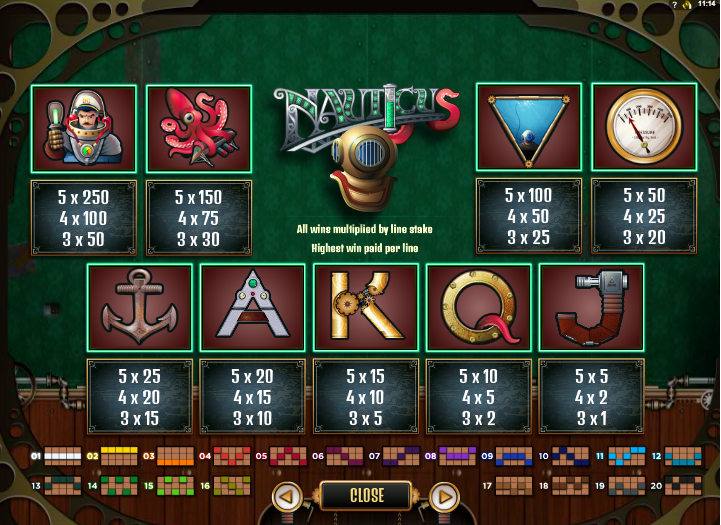 A trip between the ocean waves awaits those who enjoy steampunk-themed online slots and there’s also a touch of Jules Verne about Nauticus; it’s developed by Wagermill/Openbet and not only does it have an interesting theme, it also has three different bonus features to get your teeth into. Read the full review below for more information.

Nauticus is a five reel slot with three rows and up to twenty paylines; it’s set inside the metallic environment of a submarine not unlike that operated by Captain Nemo. To the left and right of the reels are liquid meters associated with the features and behind the reels the deep blue ocean awaits.

There are five high value symbols – the scuba diver, the giant squid, the anchor, the triangular porthole and the pressure gauge; J, Q, K and A represent the lower end.

There are two wild symbols – the shark and the submarine; both appear only on reels two, three, four and five and the sub only appears during the free spins round.

There are three scatter symbols – the mine, the Free Spins icon and the Bonus icon which all activate separate features.

This is triggered by landing three or more of the bonus scatter symbols anywhere in view; you will be taken to a screen displaying a lattice of mines on the left hand side and the submarine on the right. All you have to do is press the ‘Fire’ button and hope the torpedo destroys the increasingly valuable mines. Each time you hit a mine the number of torpedoes is reset to three.

Landing three or more of the Free Spins icons kicks this game off and you will receive the following:

The submarine wilds can appear now and they are sticky, meaning that they will stay in position for up to five spins when they land.

Trigger this by landing three or more of the mine scatter symbols anywhere on the reels; all you have to is pick one of those symbols to reveal a cash prize.

There’s loads going on in Nauticus which is always a plus point for us; the various feature seem quite easy to trigger and the sound effects are appropriately mechanical. The only gripe is the rather low RTP of 92.60%.