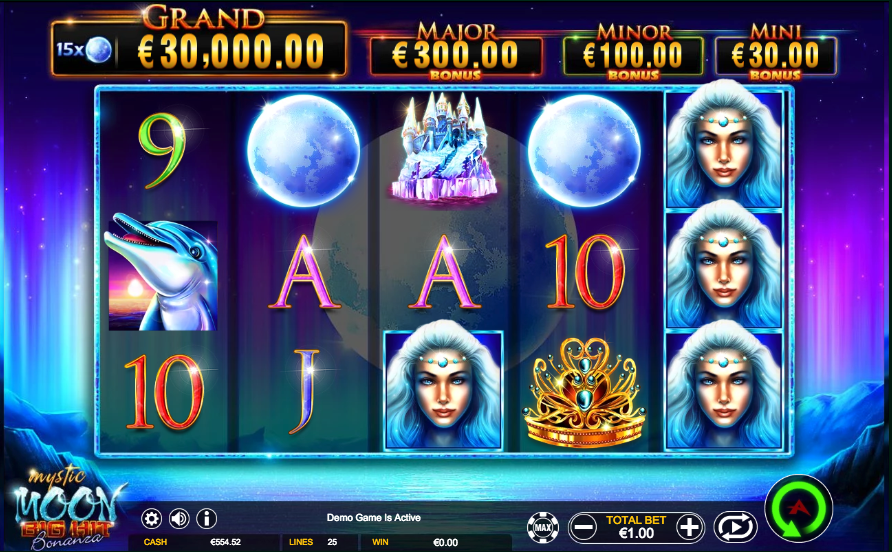 We’re relocating to the far north to check out this chilly online slot from Ainsworth Gaming; it has the full title of Mystic Moon Big Hit Bonanza and not only does it have several extra features, it also has a selection of jackpot prizes on offer.

Mystic Moon is a five reel slot with three rows and twenty five fixed paylines; a gigantic full moon flanked by shafts of the Aurora Borealis forms the backdrop to the reels which hover over the chilly water.

The high value symbols here include a dolphin, a crown, something which could be a musical instrument, an ice castle and a red pearl; 9, 10, J, Q, K and A make up the lower values.

The white-haired goddess is wild and she will replace all others to help form winning combos except for the bonus and moon scatter symbols.

This is triggered by landing three of the bonus symbols anywhere on reels two, three and four and one of the jackpot prizes (Major, Minor or Mini) will be randomly awarded to you.

Trigger this by landing at least six of the moon scatter symbols (they’re stacked) anywhere on reels two, three and four; each of those symbols will now display one or two free spins but they are not used just yet. First you’ll receive three free spins with those moons held in place and each extra moon which lands will also award a cash prize, reset the spins to three and freeze in place.

When that’s all finished, the free spins totalled in the original moons will be played out until they’ve been depleted. During this round the wild goddess appears stacked on reels two, three and four.

This can be triggered randomly and you’ll be awarded three respins on a set of reels on which is a huge moon over reels two, three and four; this moon will reveal between nine and eighteen free spins and then the gameplay commences in a similar fashion to the Big Hit feature – any more moons reset the spins, a prize is awarded and the moon freezes in place.

The free spins collected then play out as before.

The Grand Prize shown above the reels can be won in two ways:

Mystic Moon is a slot which is a cut above some others from Ainsworth – there’s a nice vibe to it which is not particularly spoiled by the mostly mechanical sound effects and various, well-thought out features to aim for. It comes with an RTP of 94.07%.