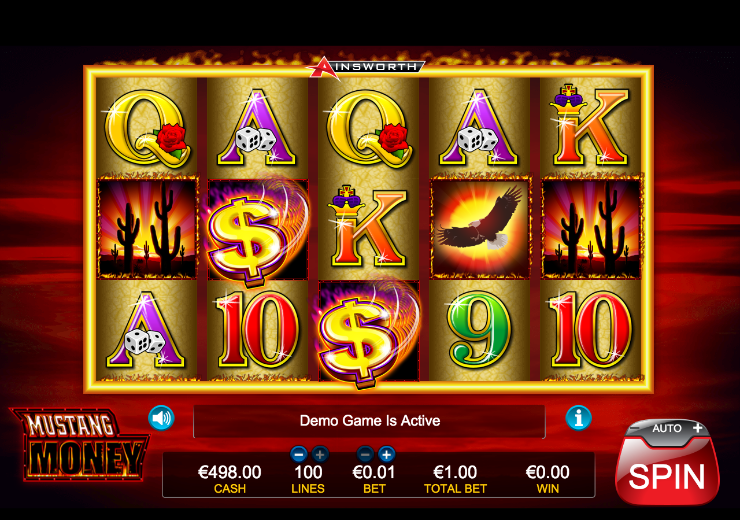 Sometimes you have to use a bit of imagination to work out what the theme of a particular game is and that seems to be the case with this online slot from Ainsworth Gaming Technology; it’s called Mustang Money and perhaps it would make more sense if we were more familiar with the mysticism of the desert environments of the southern American states. Still, it looks good, comes with a free spins feature and you can read all about it below.

Mustang Money is a five reel slot with three rows and up to one hundred paylines; there’s a dark red sunset behind the reels which are flaming gently at the top.

The high value symbols include a swooping dollar sign, the sun rising behind rock stacks, an eagle in front of the sun, a fire and some cacti silhouetted in front of (yet another) blazing sun. Lower values are the standard 9, 10, J, Q, K and A.

The flaming Mustang head is the wild symbol, it appears stacked on reels three, four and five only and it substitutes for all others except the scatter symbol – that’s represented by the Mustang Money logo and it activates the main feature.

This is triggered by landing three or more of the Mustang Money scatter symbols anywhere in view and for this you will receive ten free spins.

The wild Mustang now appears only on reel three but an extra wild symbol – a coin – now appears on reels two and four. This coin multiplies wins as follows:

Landing three more scatters during this round will award an extra five free spins.

Mustang Money zips along smoothly enough and the graphics are certainly of a decent quality; we found it relatively easy to trigger the free spins which is always a good thing. There’s an RTP of 94.38%.