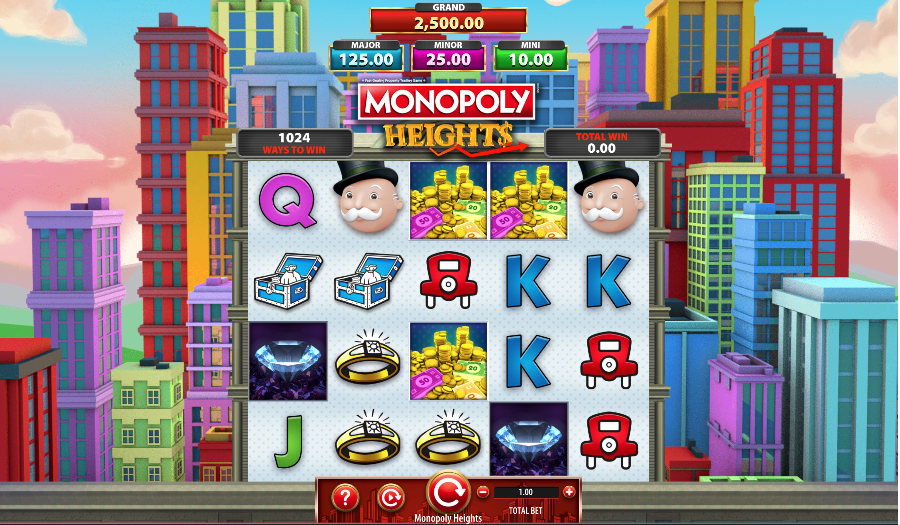 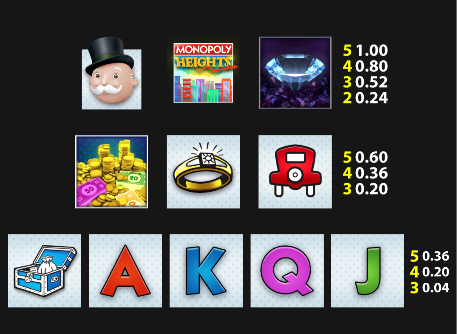 Online slots players in search of a Monopoly-themed game don’t need to look to hard because Bally Technologies have developed several in the past and here we have one more to add to the list – it’s called Monopoly Heights and it offers players several jackpot prizes and reels which expand to thousands of paylines.

Monopoly Heights is a five reel slot with four rows and 1024 ways to win initially; behind those reels the Monopoly city stands, created by correctly coloured houses and hotels to match the original board game.

The higher value symbols include the Monopoly Heights logo, a huge diamond, a pile of cash and Monopoly money, a diamond ring, the Free Parking sign and the Community Chest sign; J, Q, K and A are the lower values.

The dice are wild, they appear on reels two, three, four and five and they will substitute for all others to help form winning combos; Mr Monopoly and the hotel are the scatter symbols.

Any winning spin which contains Mr Monopoly will trigger this feature and he will strut across the top of the screen before increasing the rows in play; all symbols will be held in place and if any more Mr Monopolys land on the new row another will be added. This continues until there are eight rows (with 32768 paylines) of no more Mr Monopolys land – the payout is then calculated.

Trigger this by landing the hotel anywhere on reels one and five and you’ll get to play a picking game to win one of the four available jackpots; just click on them till one of the meters representing the various jackpots has filled up.

Monopoly Heights is good fun although it doesn’t offer some of the same complexity as its predecessors; what it does offer though is one of the lowest variances we’ve seen – the highest base game payout is equal to the stake – so it’s a good job the features hit regularly.