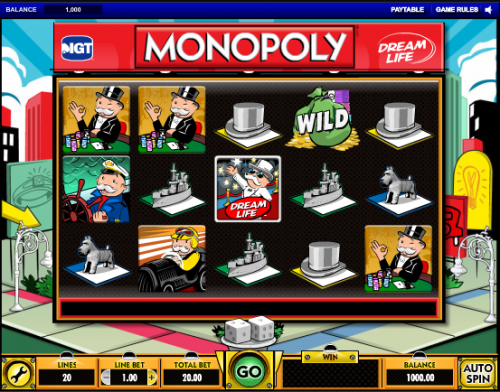 Board games are a great theme on which to base online slots and the traditional game of Monopoly offers a wealth of opportunities for extra features and funky symbols.  Monopoly Dream life from IGT has some similarities to that company’s recent Monopoly Plus slot but it’s different enough to offer a distinctive gaming experience.

It’s a five reel and twenty payline slot with some appropriate sound effects which are not just limited to music; there are plenty of city sounds to accompany the gameplay.  As you might expect the symbols are Monopoly pieces and from low to high value we have the hat, the warship, the dog and then Mr. Monopoly in a boat, in the car, playing poker and on the red carpet.  A bag of money is the wild symbol and there’s a bonus symbol which triggers the feature.

This is a feature which we really like and on other machines it’s sometimes referred to as cascading reels.  When you land a winning combo those symbols will disappear allowing more symbols to fall into their place, offering new opportunities for winning lines.  This feature is also available in the Dream Life bonus game and the video below shows a big win via this method

The main bonus game  is a free spins round and it’s triggered by landing the bonus symbol on reels one, two and three.  You will then get the chance to pick four property cards, each of which reveal a number of free spins.  You can discard two if you think two more picks will result in more spins.

The spins will now take place and as you can see from the video below it can be quite profitable. Unfortunately you can’t trigger more spins while in this phase.

This is a great accompaniment to IGT’s Monopoly Plus with some nice features to keep you entertained.  Play both at once if that’s what tickles your fancy!