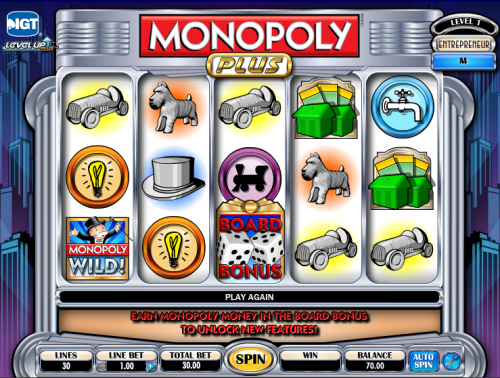 Monopoly is the board game which conquered the world; first devised at the beginning of the 20th century it remains an incredibly popular pastime with versions created for pretty much every electronic platform.  This online slot by IGT combines a great looking game with some genuine monopoly gameplay and it’s a winner.

Monopoly Plus has a real pre-war feel to it and the design of the symbols and graphics remain faithful to the board game; we therefore have a top hat, a car, a dog, waterworks and electric company symbols, a train station logo, houses, hotels and a Monopoly logo which is the wild symbol.  The scatter symbol is a Board Bonus picture.

The big bonus feature is triggered by landing three of the Board Bonus scatter symbols anywhere on the reels – you will then be offered the chance to pick one of the symbols which will reveal the initial number of dice rolls you’ll receive for the board game.

Now you get to play some Monopoly!  Prompted by the top-hatted Monopoly man you roll the dice and watch as your chosen symbol makes it’s way around the board, picking up bonuses on the way. Each time you land on a property you’ll also get the chance to spin a one-armed bandit for extra cash rewards with the value of the prizes dependent on the value of the property.  Have a look at the video below for a demo and check out the in-game instructions for a full list of Board Bonus features.

As you continue to play and take part in the bonus game you will notice an indicator in the top left hand corner; this measures how much Monopoly money you are collecting and gradually levels you up.  You start the game as an entrepreneur and continue as a leader, executive, luminary, baron and then tycoon.

Each time you level up you will receive extra rewards in the form of mini-games and permanent wilds plus the chance to pick different movers with which to play the mini-game.

This is randomly triggered bonus and if you are lucky enough to receive it, Mr. Monopoly will pop up and stroll around in front of the reels, turning up to five of them completely into wilds.  If you’re wondering how wins are calculated when every symbol is a wild, it’s based on the reels of the last spin.

Well we like a well thought out bonus game and this is pretty much second to none in that respect.  This game sticks pretty faithfully to Monopoly tradition and we like that as well.  Monopoly Plus has five reels and thirty fixed paylines and there’s a minimum spin bet of €0.30 up to a maximum of €150.00.