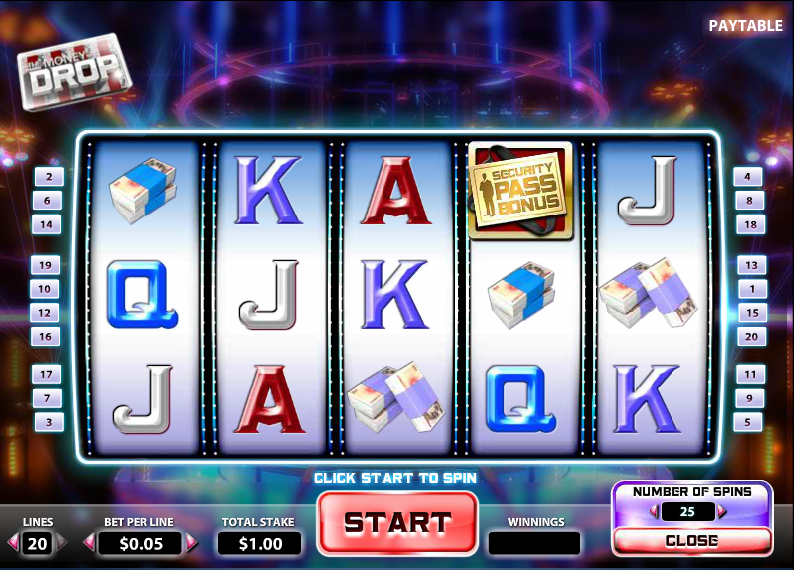 Every so often a television show appears on UK television called The Drop; it’s a tedious quiz show in which contestants essentially bet on their correct answers. This online slot is based on that premise and it’s much more entertaining – it’s called The Money Drop and it’s a brand new release from Playtech.

The Money Drop is a five reel and twenty payline game set in a glittering television studio and the graphics here are top notch. J, Q, K and A are the lower value symbols and there are four piles of cash of differing amounts which represent the higher values.

There are two wild symbols – one silver and one gold – and then there’s a Money Drop bonus and a Security Pass bonus which both trigger the features.

This particular wild only appears on reel three and if you manage that, four other random symbols will be turned wild. This means you will now have five wilds on show and the paylines will be re-evaluated accordingly.

To trigger this feature you must land three of the Security Pass symbols anywhere on reels two, three and four. You will now get the chance to collect falling bundles of cash as you can see from Video Two above and this will determine the number of spins and multipliers you will receive.

The spins will now begin and the good news is that it’s also possible to re-trigger more spins from within this feature.

This is the feature which is similar to the television show but without any quiz questions. You can see it in action in Video One above and the idea is to place your money on three of the spaces shown. All but one will swallow the money, leaving you with the remainder.

As long as you win something you will get to play again and there are eight levels available for the luckiest players. For the last few levels there are only three spaces available so you will lose proportionately more money if you bet an equal amount on each space.

All the features are triggered by scatter symbols in this game so low trollers might appreciate the ability to play with just a few paylines. High rollers on the other hand will appreciate the €1000 per spin maximum.

The TV show might be boring but this slot is anything but – the bonuses are triggered very regularly and the two main features are engaging. It’s very rare to find some interactivity when playing one of these games so it’s nice to see that in the Security Pass bonus.