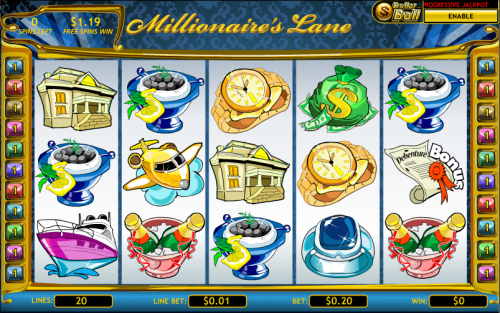 Playing online slots could be described as an aspirational pursuit; we play for enjoyment but we also play because there’s a chance of making some money.  If you play the slots which feature progressive jackpots then there’s a chance of making a large amount of money.  Slots such as Millionaire’s Lane from Playtech play up to this aspirational lifestyle, as do others such as Mega Fortune and The Finer Reels Of Life.

Millionaire’s Lane is a five reel slot with twenty paylines stuffed with symbols which show off the accessories of a luxury lifestyle.  From low to high value therefore we have a bowl of caviare, a bucket of champagne, a gold watch, an expensive-looking ring, a posh car, a yacht, a private jet and a mansion.

There’s a bonus symbol which is a debenture certificate and a maid wild; the scatter symbol is a big green bag of money.

Is there anyone who doesn’t appreciate a load of free spins?  There’s ten available when you’re playing this slot but you’ll need to land three or more of the bag of money scatter symbols anywhere on the reels to activate them.

The good news is that you can win more free spins by landing more bags of money whle playing this bonus game.

This is a mini-game in which you can’t fail to win some money; you need to land three, four or five of the debenture certificates on an active payline and then you’ll receive that number of picks in the next phase of the game.

You’ll be taken to a screen containing a number of upturned certificates; just click to turn over three, four or five of them to reveal cash prizes.

The Dollar Ball is is one of Playtech’s progressive jackpot games and to activate it you’ll need to click the ‘Enable’ button in the top right hand corner.  It costs a little extra on top of your wager and it’s a lottery-type competition where you get to pick five numbers between 1 and 49. With every spin a lottery draw will be made and a variety of prizes are available including the huge prize for matching all five numbers.

Millionaire’s Lane is a colourful and fast-moving slot from Playtech with a two bonus features and a chippy soundtrack. Progressive jackpot fans will appreciate the Dollar Ball feature.