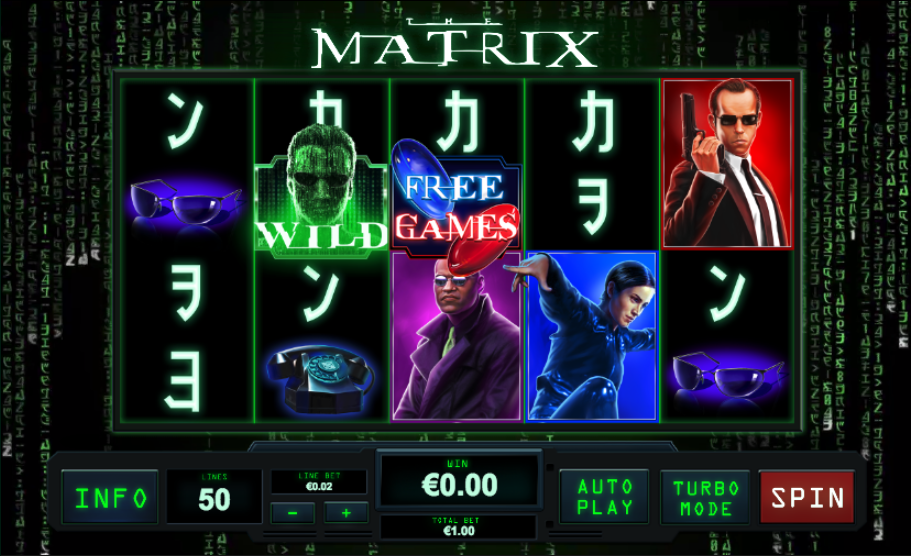 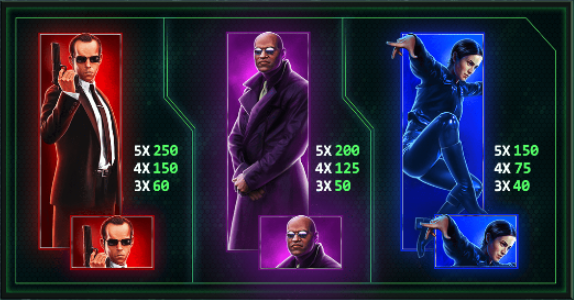 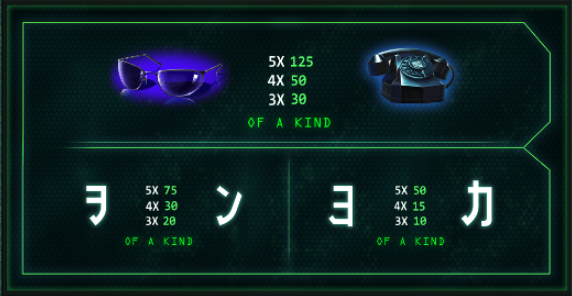 It’s been a very long time coming but finally, 18 years after the ground-breaking science fiction movie was released in cinemas, The Matrix has discovered new life as an online slot machine; it’s developed by Playtech and it’s as atmospheric and futuristic as you might imagine.

The Matrix s a five reel slot with four rows and fifty fixed paylines and as soon as you load this game up you’re transported into this universe where enlightened humans battle against the technology which has enslaved the world. The sounds come straight from the movie and the backdrop is made up of those scrolling green characters familiar to fans of the trilogy.

Three characters from the film – Agent Smith, Morpheus and Trinity are higher value symbols along with Smith’s sunglasses and a telephone; four programming characters make up the lower values.

The main wild symbol is Neo in programming form (right) and he will substitute for all others to form winning combos except for the Free Games scatter; there’s also the deja vu cat which can appear on reel five as a wild and which has a bonus feature explained below.

This is triggered by landing three of the Free Spins scatter symbols anywhere on reels one, three and five and you will now get the choice of the following two free spins modes:

Trigger this by covering all positions on reel five with deja vu wild cats and you’ll see that reel one will also become full of cats; the remaining symbols will then shuffle to provide a guaranteed win.

You don’t need to be fans of the superb 1999 film to like this slot but it’s a good excuse to go back and rewatch a classic; The Matrix is a superb game which uses elements from the movie very successfully to create an immersive atmosphere and some clever features. It comes with an RTP of 95.14% and, whether you prefer the blue or red pills,  should not be missed.