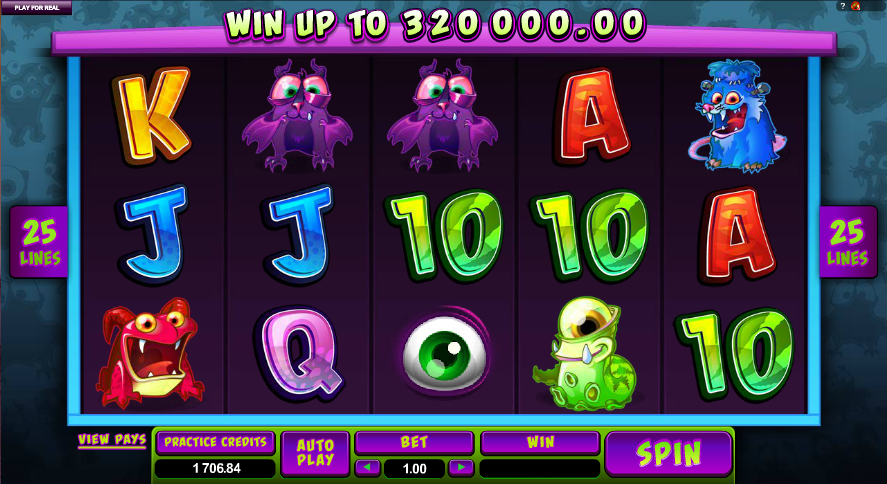 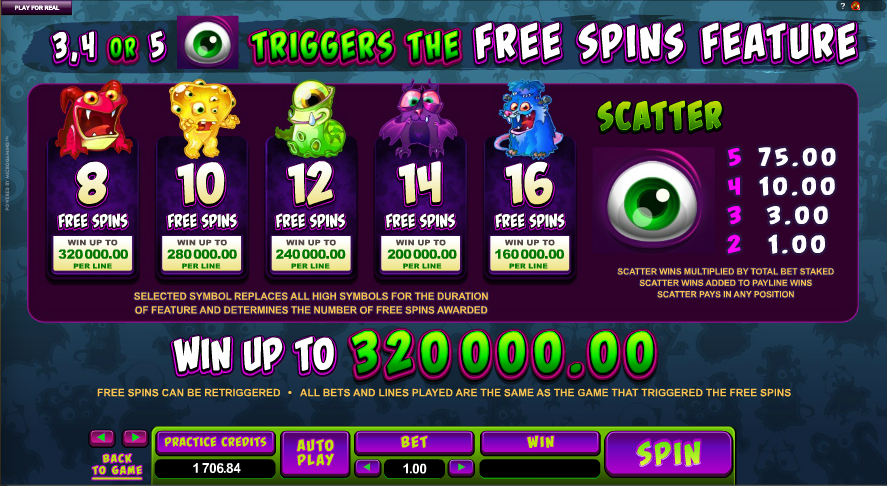 Microgaming have recently released a trio of colourful and entertaining online slots which are pretty similar in gameplay but differ in their themes. There is So Much Candy, So Much Sushi and then this one, So Many Monsters. These monsters aren’t scary at all, they’re all very cute but there are lots of them, hence the title. Read on for more information.

So Many Monsters features five reels and twenty five fixed paylines and those reels are set against a rather dull background. All the colour here is in the foreground though and everything is designed in a cartoonish style which suits the theme.

The main symbols are monsters of course and can be identified by their colour so we have blue, purple, green, yellow and red. 10, J, Q, K and A are the lower values.

The wild symbol is represented by the So Many Monsters logo and there’s also an eyeball which acts as the scatter.

This is the game’s main draw and whenever you land a win made up of monsters, those creatures will split into up to five smaller ones. If you’re extremely lucky then it’s possible to make up a combination of twenty five symbols which would pay 640x your line stake for the most valuable red monster.

This is where those eyeball scatter symbols come in handy and if you can land three, four or five anywhere in view you will trigger this feature.

You have a choice of between 8 – 16 spins as you can see from the screenshot below but the more spins you choose, the lower your prize per spin.

Landing three more eyeballs during this round will earn you more spins.

So should you choose fewer spins with higher payouts or vice versa? Having played through each of the options several times our view is that it doesn’t make any difference. More spins will extend the entertainment a bit longer if you like that sort of thing.

So Many Monsters is good fun, even if it is very similar to So Much Candy/Sushi. The sounds are good, the graphics are cheerful and the splitting symbols are a nice touch.