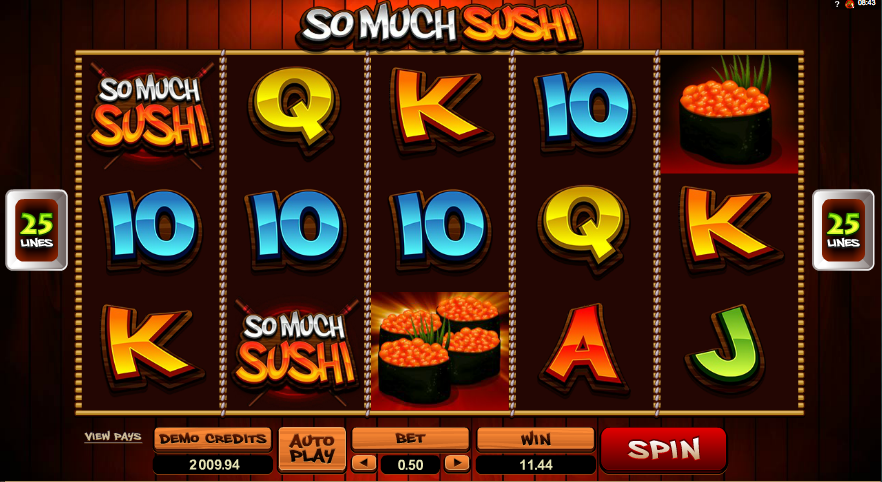 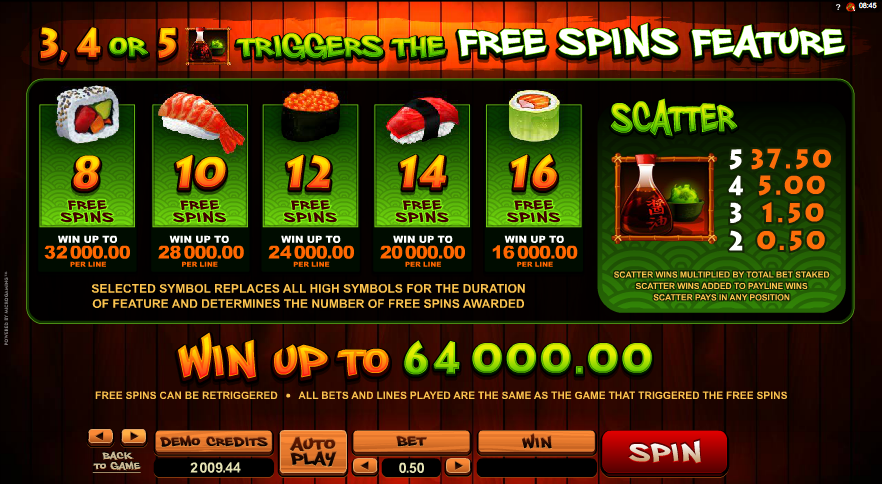 So Much Sushi is one of three online slots from Microgaming which share the same development platform but have different subjects. The others are So Many Monsters and So Much Candy and the theme for all three games is clearly one of too much stuff. Sushi may be an acquired taste but it should have a wider appeal here as that raw fish can win you prizes.

So Much Sushi is a five reel slot with twenty five fixed paylines and there’s slightly gloomy atmosphere to proceedings reminiscent of a traditional sushi restaurant. We don’t know much about sushi but there are five main symbols here each of which are apparently made up of fish, rice and seaweed. 10, J, Q, K and A are the lower values.

The So Much Sushi logo represents the wild and there’s a bottle of fish sauce which is the scatter symbol.

When you land a winning combination which features the main symbols then those bits of sushi will split up to five times. Ultimately this means that you could make a combo with 25 symbols across five reels. The most valuable is the white sushi which will pay 640x your line stake.

This feature is triggered by landing three, four or five of the scatter symbols anywhere on the reels. As you can see from the screenshot below you will now be offered five choices from 8 – 16 spins and the symbol associated with those spins will replace all the other main ones. The fewer spins you choose, the more valuable each win will be and there’s a top prize here of 32000x your line stake.

You can re-trigger the spins by landing more scatter symbols during the feature.

So how many spins should you choose? If you like the slim possibility of a big win then go for the lower numbers but for more entertainment/less profit go for the higher spins.

We certainly like this slot more than we like actual sushi; there’s always lots going on whether it’s the splitting symbols or the fairly-easy-to-trigger free spins. The graphics and music are nice too – check it out.