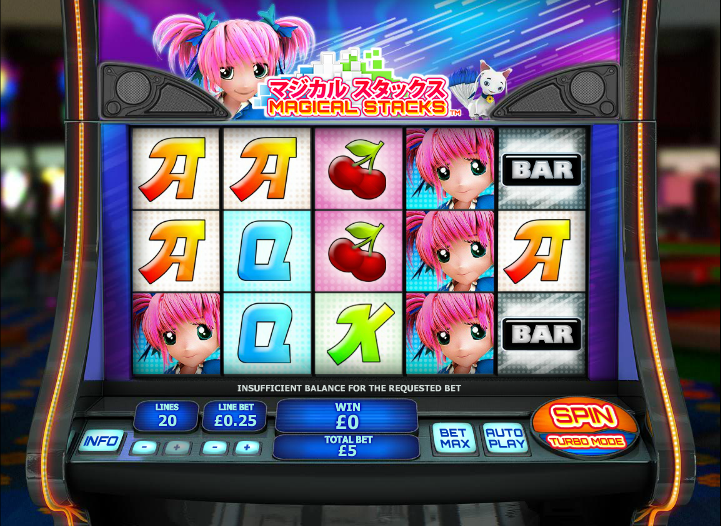 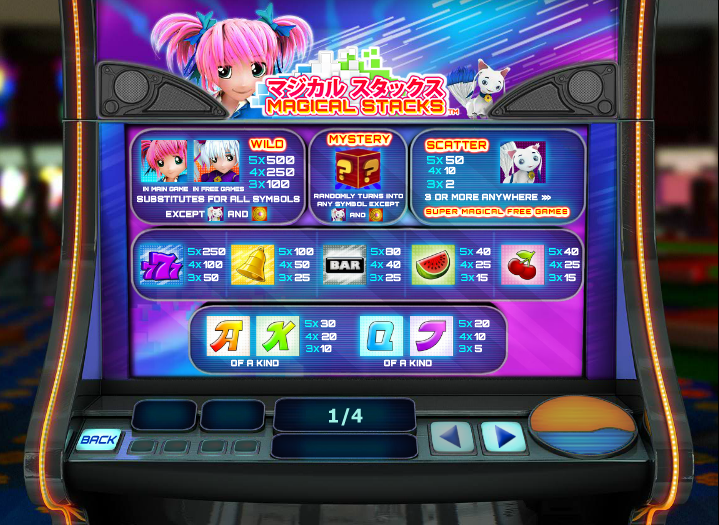 Magical Stacks s a slightly unusual online slot but one which should transport players to a neon-lit arcade late at night in Tokyo. It’s developed by Playtech with a pounding soundtrack and a colourful, anime-inspired design to assault your eyeballs. It also includes two separate bonus features so read the full review below for all the essential details.

Magical Stacks is a five reel slot with three rows and up to twenty paylines; this is a realistic-looking game played out on a slick cabinet and there’s the blurry outline of casino activity in the background.

The high value symbols are of the standard fruit kind and include purple sevens, bells, bars, watermelons and cherries; J, Q, K and A are the lower values but designed in a typically Japanese style.

The pink-haired and white-haired girls are the wilds and appear in the main game and free spins round respectively; the cube with a question mark is a bonus symbol and the scatter is a cute little cat which activates one of the features. The Chinese coin has a special function within the free spins.

Stacks of the mystery cubes will appear randomly in the base game and more often in the free spins round; these cubes will transform into the same symbol, offering the opportunity for some big wins if they match what’s already on the reels. The cubes cannot become wild or the Chinese coin.

Landing more scattered cats will earn more free spins indefinitely and more cubes will always appear during this round.

Magical Stacks is something a little different from Playtech but it’s certainly good fun – it’s action-packed, colourful and loud and those extra features can result in some big wins. The RTP is 95.03%.