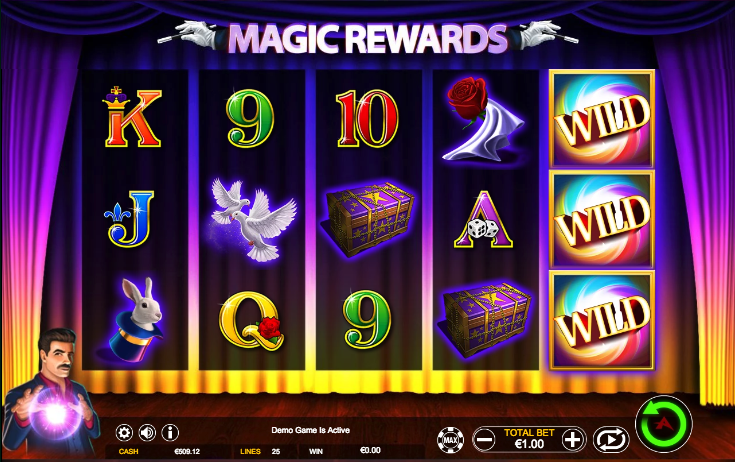 The world of fantasy and illusion is our destination this fine day as we check out an online slot called Magic Rewards; it’s developed by Ainsworth Gaming and it’s based around the exploits of a magician sporting a fabulous hairdo and a superb moustache.

Magic Rewards is a five reel slot with three rows and twenty five fixed paylines; plush curtains lit with purple and yellow form the backdrop to those reels while a gloved hand produces doves at the top of the screen. Our magic man levitates a crystal ball in the bottom left corner.

The high value symbols include a rabbit appearing from a hat, a locked box, a rose and a pair of doves; 9, 10, J, Q, K and A make up the lower values.

The wild is a swirly, colourful ‘Wild’, it appears only on reels three, four and five and it will substitute for all others to help form winning combinations except for the gloves and the magician.

This is triggered by landing at least three of the glove scatter symbols anywhere in view for which you will receive an initial eight free spins. Reel three is the magician’s reel during this round and on each spin the hope is that one, two of three magicians will appear there to award the following:

Ainsworth Gaming slots have a particular look and feel and it’s probably fair to say that those who like them will enjoy Magic Rewards; it may not be graphically spectacular but the reels spin and there are plenty of free spins available. This game comes with an RTP of 94.59%.