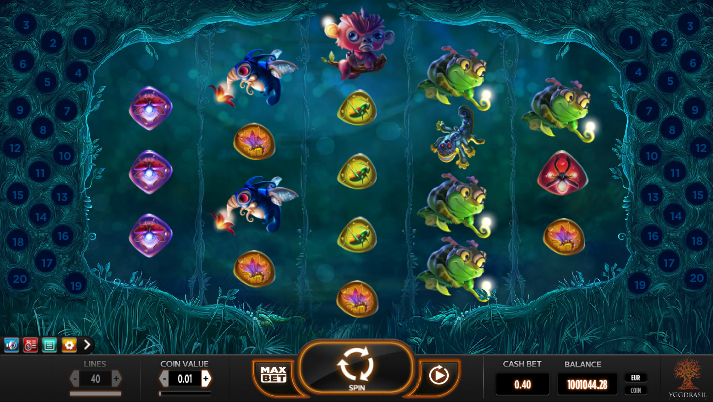 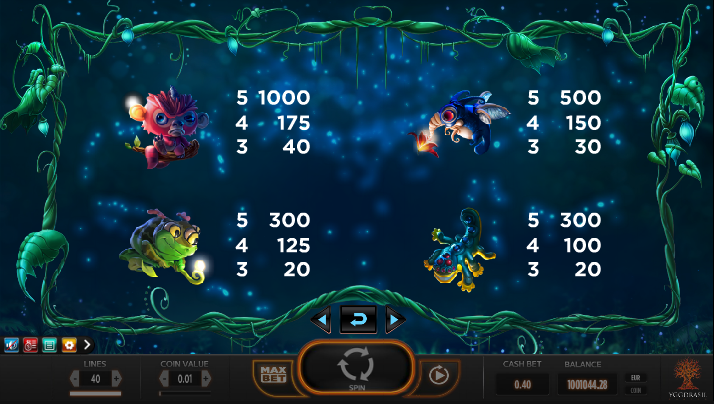 If you’ve arrived at this review because of the interesting title then be prepared for a modicum of disappointment; the Magic Mushrooms of the title are not the sort to give you a 24 hour nightmare, their purpose is rather more prosaic, acting as various types of wild symbols. It’s all good fun though so check out the review for more information.

As you can see from the screenshot above, Magic Mushrooms is a five reel slot with three to five rows and forty fixed paylines; the setting is some sort of deep forest where odd woodland creatures spend their days in the perpetual gloom – they seem quite happy though.

There are eight high value symbols and these comprise four creepy little critters along with the four chrysalises from which they initially emerge. The most valuable is the pink thing which is worth 1000x your line stake for five on an active payline.

Winning lines can be formed from right to left as well as left to right in this game.

There are three wild mushrooms which have different attributes and these are explained fully below; the glowing purple snail thing is the scatter symbols which activates the main feature.

The three wild symbols are active in the base game and free spins and are as follows:

The key to these spins is landing three or  more of the glowing snail scatters anywhere in view for which you will be awarded:

More wilds of all kinds are added to the reels during this round and landing more snails will award more spins; in fact two will award two more spins.

Magic Mushrooms is a great-looking game with lots going on and an atmospheric soundtrack; the various wilds are probably the biggest attraction but there are also big wins available in the free spins feature. The RTP is a respectable 96.40%.