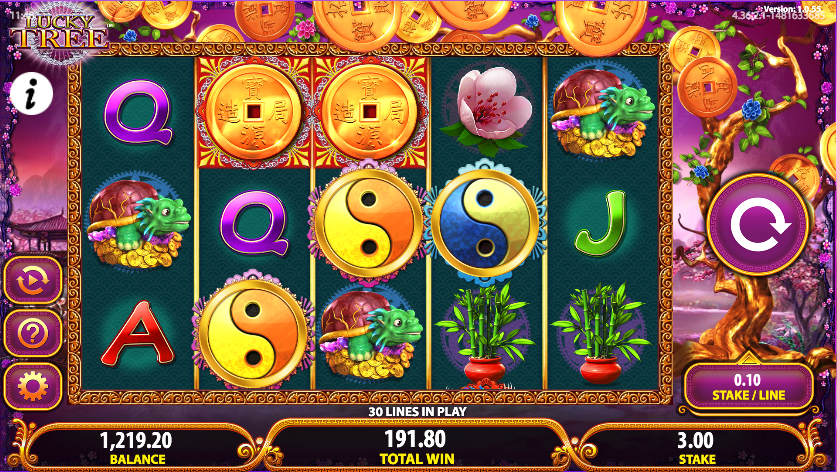 It’s no secret that we need a bit of luck when spinning the reels on an online slot machine so any game which uses symbols of luck is fine by us; Lucky Tree is a Chinese-themed game from Bally Technologies with some lovely graphics and several bonus features – read all about it below.

Lucky Tree is a five reel slot with three rows and thirty fixed paylines; those reels spin within an ornate golden frame which sits in front of a hazy purple landscape of flowering trees and distant mountains.

The higher value symbols are three stylised animals – a toad, a fish and a turtle along with a bamboo plant and a pink flower; J, Q, K and A make up the lower values.

There are four wild symbols in Lucky Tree – the dragon, wild Yin Yang, gold coin and wild lucky cat and each will substitute for all symbols except for other wilds. Scatter symbols include Yin Yang and lucky cat.

This is triggered by landing three of the Yin Yang/wild Yin Yang symbols anywhere on reels two, three and four; you will be awarded ten free spins which can be retriggered by collecting three more scatters. On each spin wild coins will be added to the reels to help out with some big wins.

Trigger this by landing three or the lucky cat/wild lucky cat scatters anywhere on reels one, three and five; now you must pick one of the three spheres to determine the number of picks (6-15) in the next stage. That involves selecting from the grid and finding matching pairs which correspond to multiplier values in the various charts; those multipliers are totalled and then applied to your stake.

This can occur randomly on any spin and up to seven wild coins will fall onto the reels, after which any new payouts will be evaluated.

There’s a lot going on in Lucky Tree but hopefully we’ve explained it all; it’s a very high quality game with plenty to offer including three bonus features and lots of wild wins – it comes with an RTP of 96.00%.