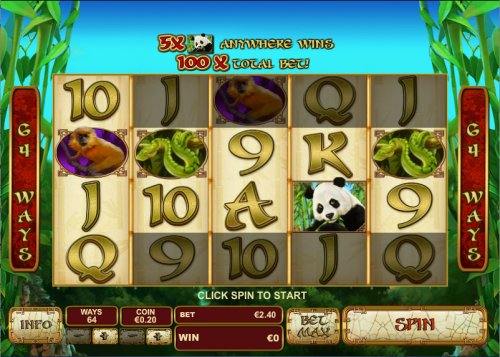 Another animal themed online slot from Playtech is Lucky Panda, a charming and atmospheric diversion which should provide plenty of entertainment and hopefully some profit.  There’s definitely an Oriental, possibly Chinese, feel to the whole vibe of the game but the main theme is nature and animals, accompanied by a Far Eastern soundtrack.

Lucky Panda is a five reel slot machine which dispenses with paylines and just describes itself as having an incredible 1024 ways to win.  This is accomplished by having four rows of symbols rather than the more usual three.  This can make the stake a little pricey but more of that later.  All the standard slot symbols are here – 9, 10, J, Q, K and A – and they are joined by some well-rendered creatures: tiger, snake, panda, monkey and small bear.  The panda symbol is the scatter while the wild is symbolised by the Lucky Panda logo.

The bonus game is triggered by landing three pandas in one spin and what this wins you is fifteen free spins.  Any wins during this period will be doubled and the wins are only active on the reels you currently have active, so if you’re playing with less than the 1024 ways to win, the wins will be proportionately less. If you land three pandas during the free spins you’ll get another fifteen to a maximum of 210.

If you spin just two pandas while in normal game mode you always get another chance to spin a third; the two pandas will freeze in place and the remaining reels will spin, giving you one more chance to land a third.

The 1024 winning ways essentially means that  that you are not restricted to the normal payline patterns and any combination of matching symbols on any reel position will be a winning spin.  It’s an interesting feature but it can be expensive.

Lucky Panda is an engrossing game with some great graphics but it’s not for those who like to waste a few minutes with €0.01 stakes.  If you’ve got the funds though, dive right in!