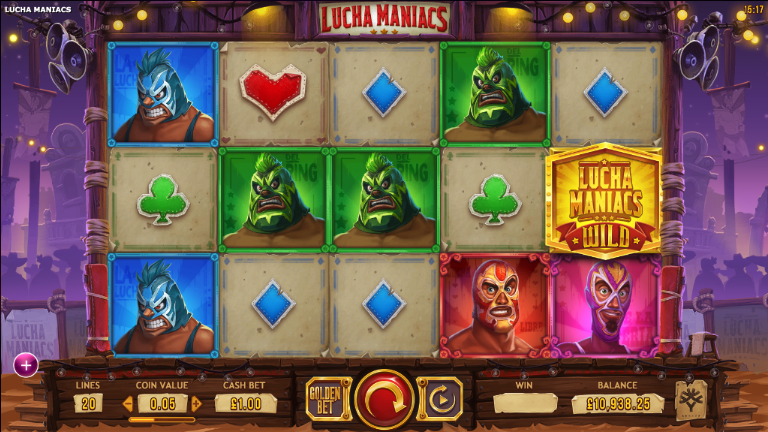 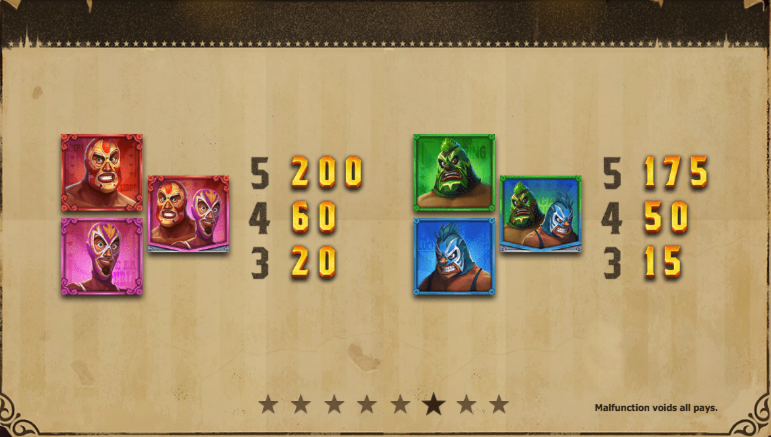 Without doubt some of the world’s most exciting entertainment is Mexican wrestling, otherwise known as Lucha Libre; this means it’s good news that there’s an online slot dedicated to this colourful sport in the shape of Lucha Maniacs – it’s developed by Yggdrasil Gaming and it’s full of themed features.

Lucha Libre is a five reel slot with three rows and twenty fixed paylines; those reels spin on a dodgy-looking wooden structure with loudspeakers attached to the top corners while in the background we can make out crowds of wrestling punters through the purple haze.

Four masked wrestlers represent the higher value symbols and we can differentiate these by colour – red, pink, green and blue; playing card symbols of similar colours make up the lower values.

The game’s golden logo is wild and it will replace all others to help form winning combinations except for the wrestling ring bonus symbol.

This is triggered by landing at least three of the wrestling ring bonus symbols anywhere in view for which you will receive the following:

Before the spins start you’ll be shown some tickets and asked to pick three – this will determine which features are active during the spins:

Using the Golden Bet option will add 25% to your total stake but it will award you an extra feature when you trigger the free spins.

Trigger this by landing just two of the wrestling ring bonus symbols anywhere in view and you’ll be offered the chance to pick from four posters, three of which award a prize of between 20 and 80 coins or 7 free spins with 3 features.

Lucha Maniacs is another great slot from Yggdrasil with lots of colour, exciting gameplay and a variety of wrestling-themed symbols and features to enjoy; it’s designed to a very high quality and the RTP ranges from 96.10% – 96.20%depending on whether the Golden Bet option is used.