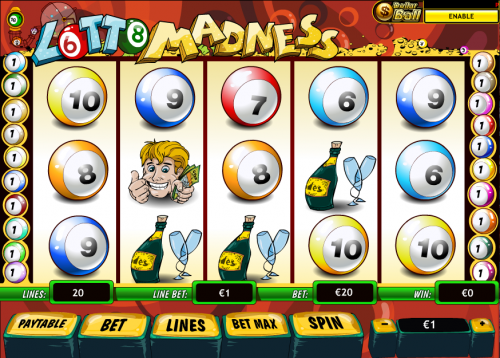 There’s nothing wrong with combining two gaming activities into one and that’s exactly what Playtech have done with their Lotto Madness online slot.  It cleverly fuses aspects of a lottery with the spinning reels of a slot and the result is an entertaining game.

The reels are set against the backdrop of money and lottery paraphernalia and it’s the lottery balls which serve to act as the low value symbols – six, seven, eight, nine and ten.  Higher up the scale the symbols are represented by a grinning winner, a champagne bottle and glasses and a pile of cash.

The wild is a lottery scratch card, the scatter is a big, gold dollar sign and the bonus symbol is a small but colourful wheel of fortune (Crazy Wheel).

To trigger the free spins win you’ll need to land the Crazy Wheel bonus symbol on reels one and five and you’ll then be whisked to a screen where you spin the wheel to reveal a combination of free spins and multipliers.  The reels will then spin according to these outcomes.

You can’t re-trigger the bonus round here but landing the bonus symbols on reels one and five will award another prize from the Crazy Wheel so it’s not all bad.

The scatter symbol doesn’t trigger anything but landing three or more anywhere on the reels wins will award an prize which is then multiplied by the total bet.

This is one of Playtech’s progressive jackpot games and you can take part by clicking the ‘Enable’ button in the top right hand corner of the screen. You can now pick five numbers between 1 and 49 just like a normal lottery. On each spin there is a draw and the more numbers you can match the better – five matching numbers will win you the current progressive jackpot total.

Just click ‘Disable’ to turn the feature off again if you don’t want to pay the 50% extra wager required.

Although not particularly state of the art, Lotto Madness is a big, colourful game which moves along swiftly.  The bonus game offers a little more than the standard free spins round we often see.