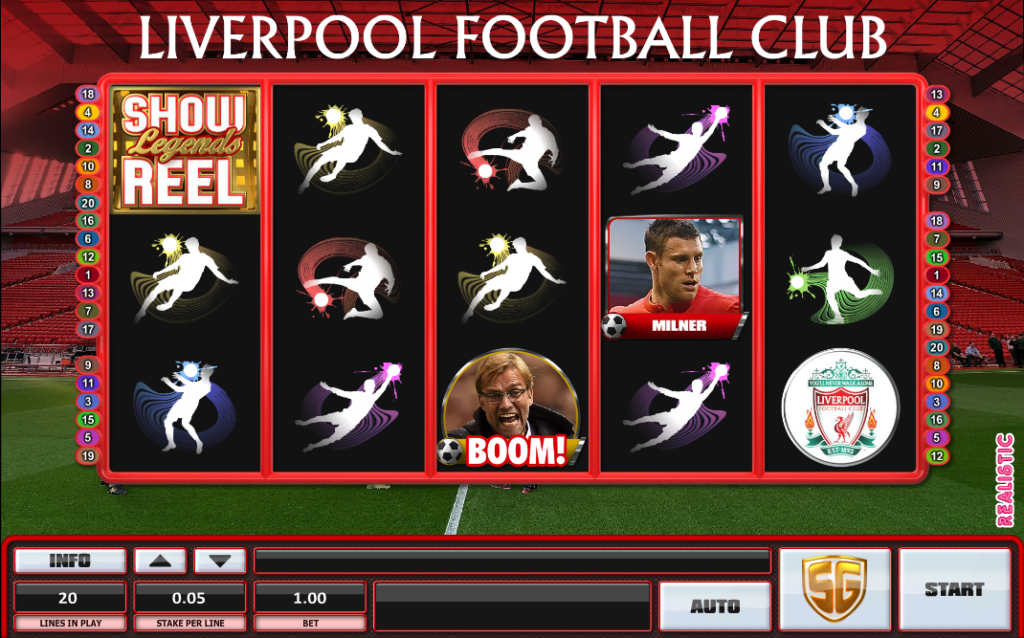 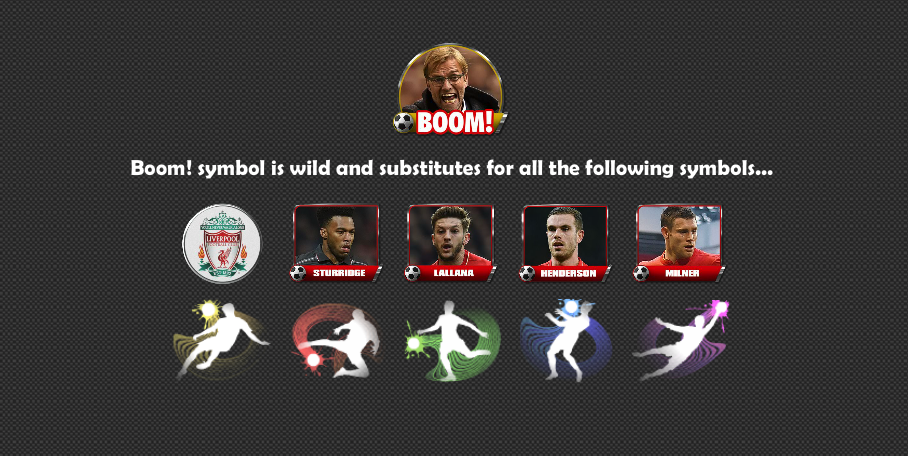 Some time ago Realistic Games released a three reel online slot based on one of the better Chelsea teams of recent seasons and now we have a game themed around Liverpool; it includes current players along with Anfield legends and an in-depth feature – read all about it below.

Liverpool FC is a five reel slot with three rows and twenty fixed paylines; behind those red reels there’s a view of the Anfield crowd complete with banners and alcohol fumes.

All the symbols are related to the theme and include the Liverpool crest, Jordan Henderson, Daniel Sturridge, James Milner, Adam Lallana and four graphics displaying various footie skills.

The Jurgen Klopp Boom! symbol is wild and will substitute for all others except the Show Reel Legends scatter which activates the main feature.

This is triggered by landing three or four of the Show Reel scatter symbols anywhere in view (five wins 250x your total stake); you will now be asked to pick one of the Liverpool legends – Michael Owen, Ian Rush, Kenny Dalglish or Robbie Fowler – to take to the next stage.

You’ll now see a 3×3 set of reels displaying your legend and a blank so press ‘Spin’ to select one of the reels for a payout. Now random positions will flash so press ‘Stop’ and that one will change to either your legend or a blank and any payouts awarded. If you select the blue position or win the jackpot by matching all positions the round is over.

This is an extra option will will cost you ten times your standard game stake but will give five linked spins; during these spins the Show Reel scatter also becomes wild and will freeze in place when landing. This makes it easier to trigger the bonus feature.

Click the big ‘SG’ button below the reels to turn Super Game on or off.

Liverpool FC is an interesting slot with something for older and younger Reds supporters alike; the Super Game option is welcome and it comes with an RTP of 95.51%.