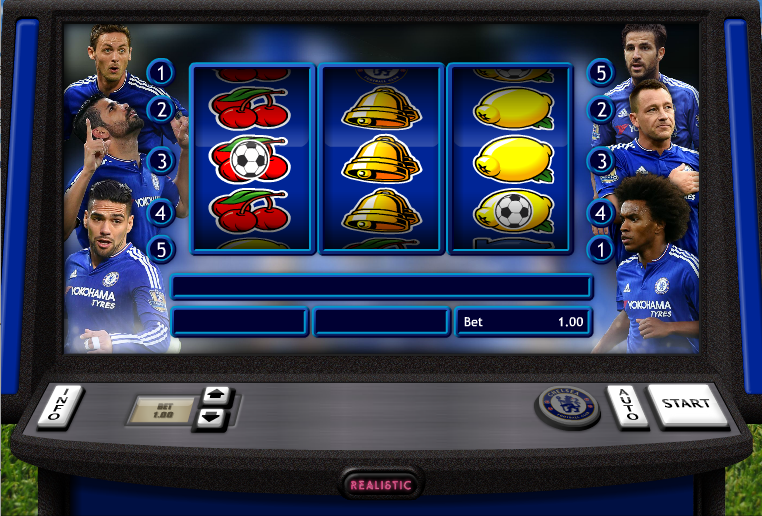 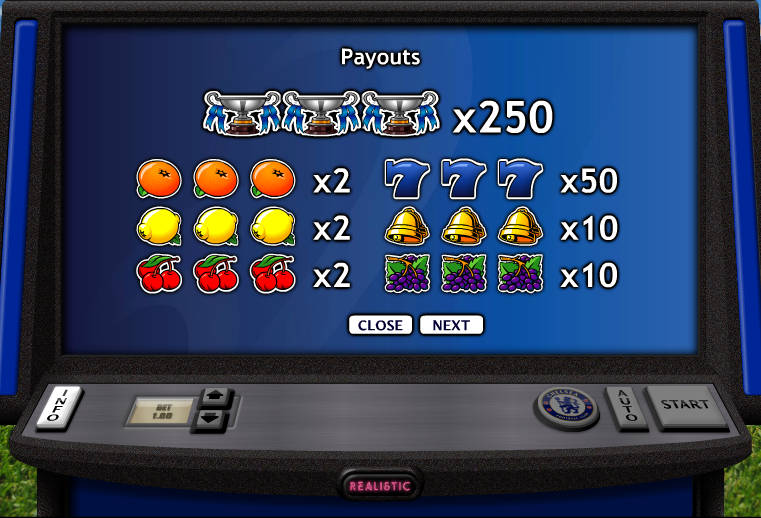 An online slot based on the Premier league champions of 2014/15 is quite a time-limited thing, especially in view of the fact that Chelsea’s form in 2015/16 has been pretty shocking up the time of writing this review. However Realistic Games’ Chelsea FC slot will always have a receptive audience from those who follow the West Londoners and this three reeler is good fun, coming complete with a free spins feature and some realistic crowd chanting.

Chelsea FC is a three reel slot with three rows and five fixed paylines; it’s the standard Realistic Games setup with a lifelike machine on the screen in front of you and assorted Chelsea players on either side of the reels. Every time you land a winning combo the crowd will break out into song to celebrate your windfall.

The symbols are of the standard fruit machine variety and include oranges, lemons, cherries, sevens, bells and grapes; the top prize of 250x your stake is earned by landing three of the trophy symbols. A football is added to some of the symbols and this is what activates the feature.

This is triggered by landing a football/fruit symbol on reels one and three along with the Chelsea crest on reel two on a payline. You will now receive ten free spins and a chance to win some footballer-style wages (well perhaps not quite that much).

During the spins, landing a Chelsea crest anywhere on the centre reel will double any wins you have already have so the more of those the better, although the maximum prize from this round is 250x your stake.

The spins cannot be re-triggered.

We’re not Chelsea fans but we can appreciate a well-made slot and this is certainly one; it’s basic by design but comes with an easy-to-trigger free spins round and some amusing crowd chants. There’s an RTP of 95.25%.