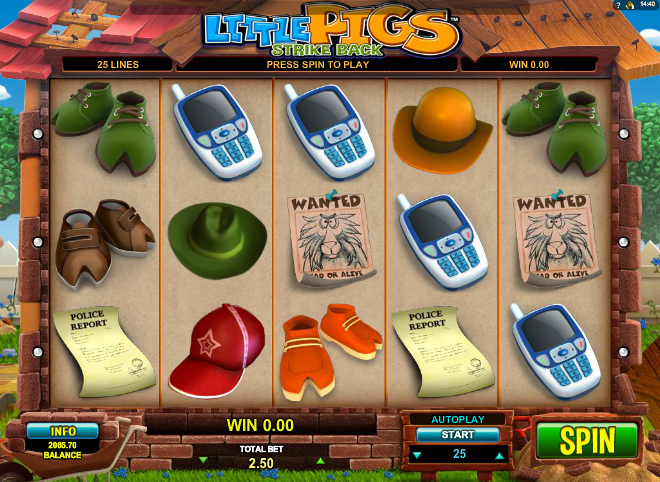 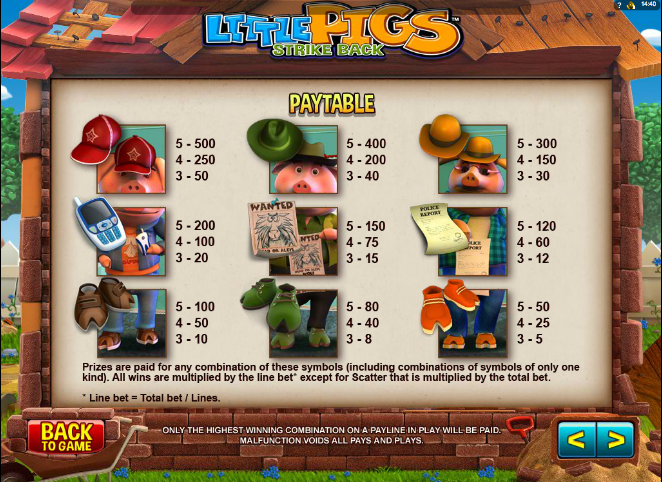 We’re all familiar with the story of the three pigs who attempts to stop a wolf blowing their houses down results in the construction of a brick dwelling. Little Pigs Strike Back is an online slot from Leander Games which is a sort of sequel to that tale in which they report the wolf to the authorities. Three games based on the original story are Big Bad Wolf, Piggies & The Wolf and Piggy Fortunes.

Little Pigs Strike Back is a five reel slot with three rows and twenty five fixed paylines; those reels are placed on the wall of a partly damaged house – presumably the brick one which was too strong for the wolf.

All the symbols are related to the theme and there are nine in total, each one being one third of a pig. Accordingly there are three sets of trotters, three pig bodies (accessorised with phone, wanted poster and police report) and three pig heads completer with differing headwear.

If the three parts of one pig appear on one reel they will turn that whole reel wild; they also act as scatter symbols and will payout for two or more anywhere in view. The red-faced policeman is the bonus symbol which activates the main feature.

This is the main feature and it’s triggered by landing three or more of the policeman scatter symbols anywhere in view. You will receive the following:

The wild pigs come in hand here because whenever part of one appears on the reels it will be nudged until the whole pig is in view, turning that reel completely wild and giving you more winning opportunities. The spins can be re-triggered by landing three+ more scatters during the feature.

We like a good sequel and we like Little Pigs Strike Back; it’s a nicely designed slot with some clever base game features and a passable RTP of 94.84%.