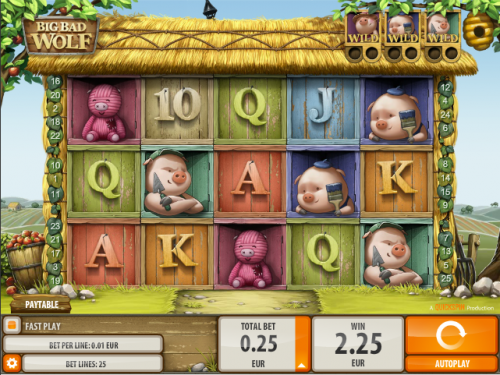 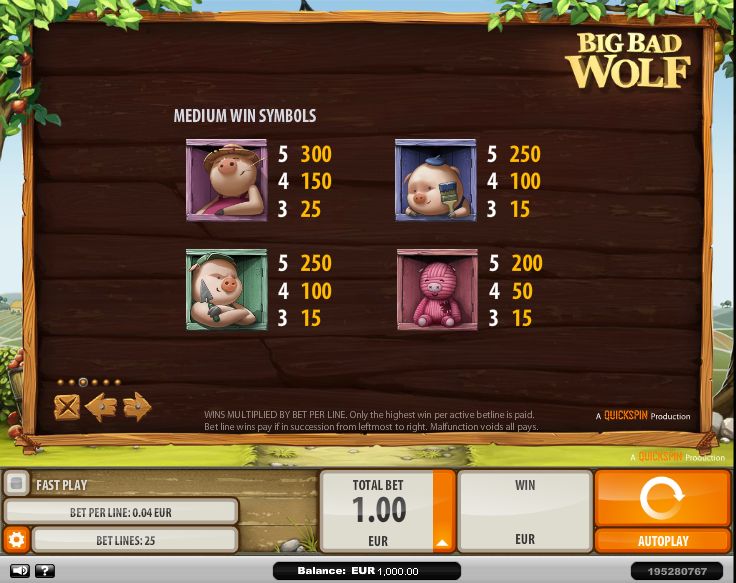 Slot machines based on children’s stories always seem to bring out the best in production values and this latest offering from Quickspin Gaming is no exception; it’s called Big Bad Wolf but it’s obviously based on the nursery rhyme Three Little Pigs, the story of three pigs and their attempts to build a house strong enough to foil the wolf.

Big Bad Wolf is really lovely looking online slot and it utilises one of our favourite features – cascading reels – but more of that later.  It’s a five reel and twenty five fixed payline slot set against the backdrop of a hilly, rural scene.  The reels are housed under a thatched roof and each symbol is a wooden crate featuring an image.

The standard playing card symbols are the low value ones while the higher value symbols are three different pigs and pig stuffed toy.  Bonus symbols are a beehive wild, a wolf scatter and a moon symbol.

This is what we’ve described above as cascading reels and when you land a winning combination, those crates will disappear, allowing more to drop in to create more winning combos.  The more wins you land in this manner, the further along the Pigs Turn Wild feature you move.

To the top right of the reels you will notice three pigs with two circles below each one; each swooping reels win fills in one circle with the following results:

It all adds up to a succession of wins and extra wilds which should keep you smiling.

If you can land three or more wolf scatter symbols the Free Spin bonus game is activated; you’ll begin by watching a nice animation of the wolf blowing down the house and then the free spins will begin.  During this phase if you can land three Moon symbols, the wolf will blow down the wood house and give you two more spins – six moons will blow down the brick house, giving another two spins and a 2x multiplier on more wins.

Big Bad Wolf is probably one of the most entertaining slots we’ve played for a while – the bonus games are innovative and we always like the cascading reels mechanism.  Paylines are fixed and you can bet between €0.25 and €250.00 per spin.