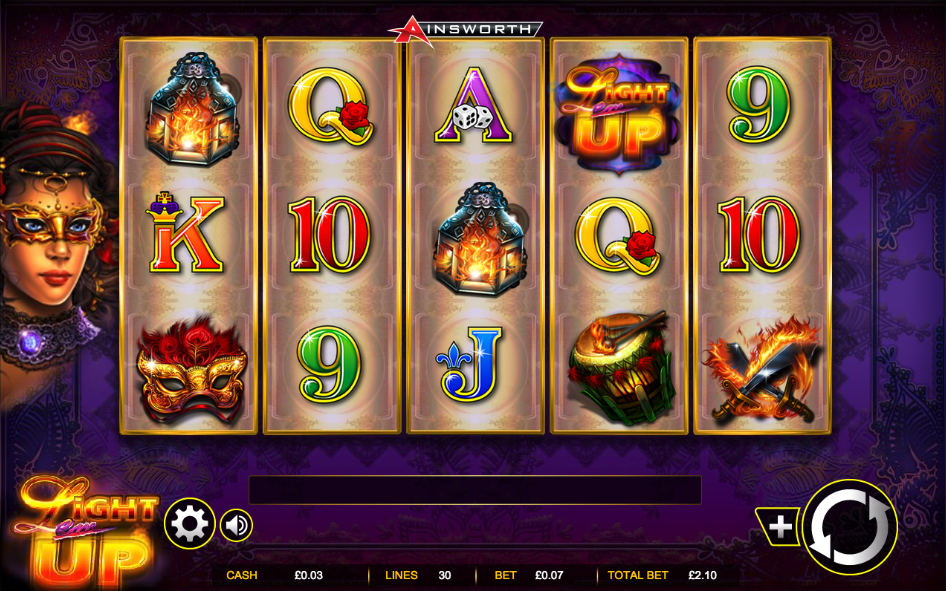 We’ve reviewed a couple of online slot machines in the past themed on the famous Venetian masked balls and here we have Light ’em Up, a release developed by Ainsworth Gaming which could have that same subject but we’re not quite sure – anyway you can read all about it below.

Light ’em Up is a five reel slot with three rows and up to thirty paylines; a masked lady watches over proceedings from the left of those reels and there’s some sort of ornate, patterned screen just about visible in the background.

The higher value symbols include a mask, a pair of swords, a lantern, a drum and a fire chucking accessory; 9, 10, J, Q, K and A represent the lower values.

The lady loitering at the side is also the wild, she appears only on reels three, four and five and she’ll substitute for all others to help form winning combos except for the Light ’em Up scatter symbols.

This is triggered by landing three or more of the Light ’em Up scatter symbols anywhere in view for which you will receive an initial ten free spins although five more are awarded each time two more scatters land during this round.

During this round an extra row will appear above reels two, three and four which contains only the wild lady and the expansion lady; these are both wilds and worth 1x, 2x or 3x in reels two, three of four respectively. When a wild appears on one of those reels during the spins it will transform into a wild multiplier or if an expansion wild appears it fills the whole reel. More than one wild value in a winning combo will be multiplied together. The Light ’em Up symbol also becomes wild.

Light ’em Up is a playable enough slot but there are certainly some big wins on offer once you reach the free spins round – we kept triggering extra spins during it and ended up with a significant win, helped out by the extra row of wilds above the reels. This game comes with an RTP of 94.38%.