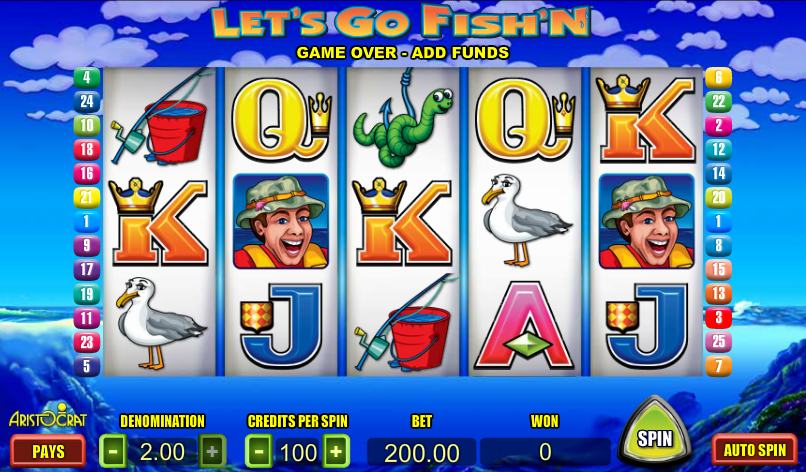 Fishing is not a genre one would think of on which to base an online slot machine but we’ve reviewed several in the past of varying quality.  Let’s Go Fish’n is a game from Aristocrat Leisure which clearly feels so comfortable in it’s quality it doesn’t even need to use proper punctuation –  the contraction ‘Fish’n’ may be a legitimate one but we’ve not seen it before.

This is a slot review though and not a grammar lesson so let’s get down to business; Let’s Go Fish’n is a five reel and twenty five fixed payline game based on that most popular of pastimes. The view behind the reels is split between the sky and an underwater scene in which no fish are visible.

J, Q, K and A are the low value symbols but the main ones are represented by a bucket, a pigeon, a happy-looking fisherman and a worm skewered on a hook (but still managing a smile). There’s no wild in the base game but there is a Let’s Go Fish’n scatter symbol which triggers the feature.

The one bonus feature in this game is the free spins round and it adds a little variety to the usual fare; to trigger it you need to land three or more of the scatter symbols anywhere on the reels and you’ll win between three and ten spins.

First you’ll need to select a character and when you do, a spotlight will appear over that position. The space underneath will light up and reveal a number of fish (which will determine the number of spins) and up to three symbols.  During the spins those symbols will turn gold on the reels and act as wilds.

If you want to play with tiny stakes and one payline you can, and you’ll still have the same chance of triggering the feature.  Higher stakes though will make the payouts more worthwhile when you do get to play the free spins.

This is a really basic slot which is just about rescued by the interesting twist to the free spins round.  Try it out but don’t spend too much time on it.