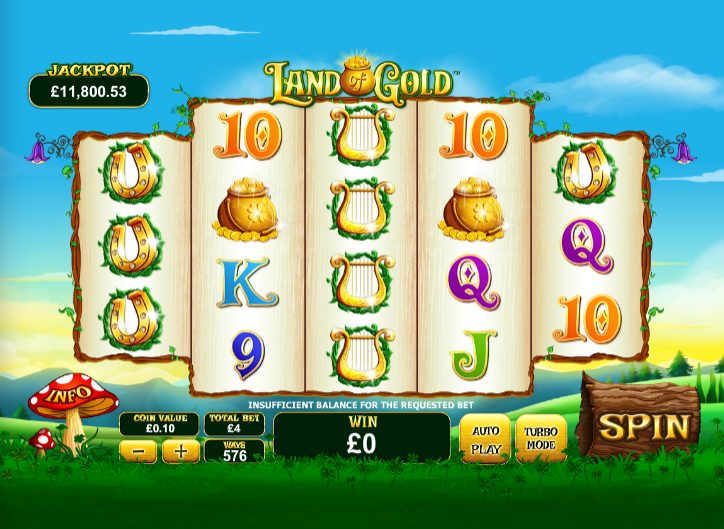 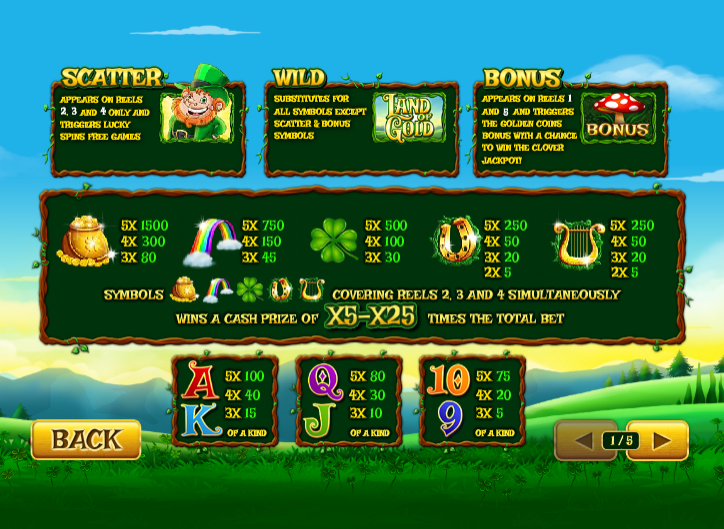 Our experience of a visit to the Emerald Isle usually involves quite a bit of rain but if you’re only familiar with this land via the medium of an online slot machine then you’d be forgiven for thinking that the sun always shines. Land Of Gold is another game which rewrites the weather forecast and it’s developed by Playtech – you can read all about the extra features and the progressive jackpot below.

Land Of Gold is a five reel slot with three/four rows and 576 ways to win – that number is created the differing row height and the ‘all ways’ payline structure. There’s a grassy, rural scene behind the reels and then that gigantic blue sky looming over mountains in the distance.

There are some familiar Irish symbols on show here including a pot of gold, a rainbow, a golden horseshoe, a harp and then the usual 9, 10, J, Q, K and A.

The Land Of Gold logo is wild and will replace all others except the bonus symbol (a toadstool) and the scatter (the leprechaun).

Reels two, three and four come in handy here and if you can land three stacks of the high value symbols here you will win between 5x and 25x your total bet.

This is triggered by landing three of the scattered leprechauns on reels two, three and four; first you must play the Wheel of Fortune which will award free spins/multipliers until you eventually hit the ‘Collect’ segment.  The collected spins will then take place and you can trigger more spins indefinitely by landing more scatters during this round.

Trigger this by landing two of the bonus toadstools on reels one and five; you will now play a game in which you must make the leprechaun jump to collect gold coins; each is worth a prize and the round finishes when you hit the black crow.

If you can collect three four leafed clovers during this round then you will win the progressive jackpot.

Land Of Gold is probably one of the better Irish-themed slots we’ve played – the graphics are of a very high quality and the bonus features offer something a little different. There’s an RTP of 95.15%.