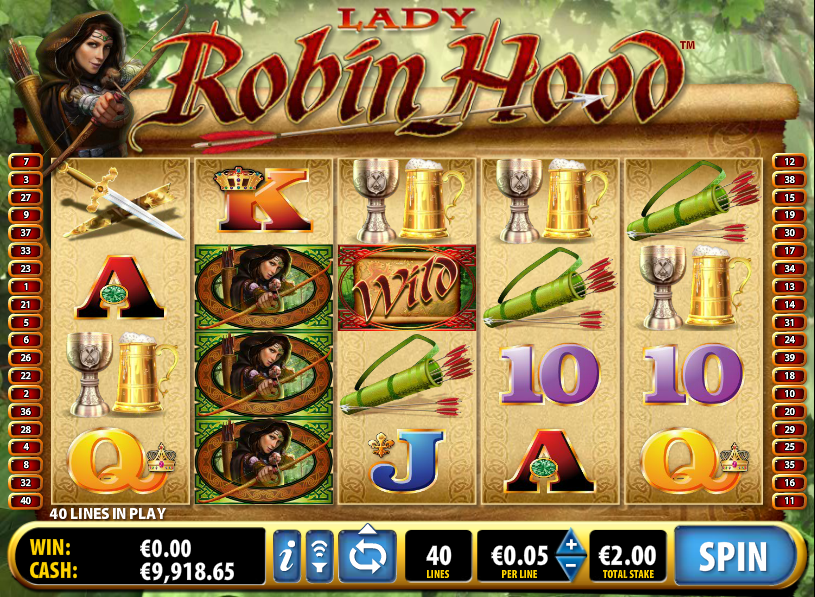 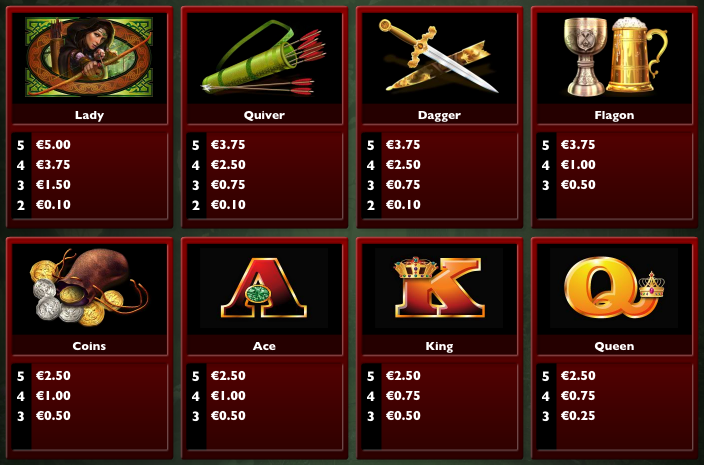 A short while ago we reviewed an online slot from Genesis Gaming called Robyn (review) which included a character suspiciously similar to a female Robin Hood. Now we can bring you the real thing – this one really does feature Lady Robin Hood as the title character, it’s from Bally Technologies and it’s a conversion from a physical slot machine.

Lady Robin Hood plays outer five reels and forty fixed paylines and of course it’s set in the leafy surroundings of Sherwood Forest. Above the reels you can see the Lady herself threatening you with an arrow.

While the lower value symbols are the standard 10, J, Q, K and A, the higher the values are related to the theme and include a bag of assorted gold and silver coins, a flagon of ale, a dagger, a quiver of arrows and the Lady; The Lady can appear stacked on all reels, offering more opportunities for winning combos.

The ‘Wild’ appears on reels two, three, four and five and will substitute for all others except the bonus symbol. That bonus is represented by the ‘LRH’ logo and appears on reels one, three and five.

This occurs randomly during the base game and between two and eight arrows will be fired onto the reels, turning symbols wild where they land. The reels will be evaluated for wins after they’ve all found their mark.

This feature is triggered by landing three of the LRH logo anywhere on reels one, three and five. You will now receive ten free spins and during this round you will see a shield above reels two, three four and five. Each shield contains four spaces and when a target symbol lands on the reels, one of the spaces is filled. When all spaces are filled above a reel it will turn wild and remain in place for the remaining spins.

You are awarded three arrows to fill the spaces initially and there’s also a chance that any subsequently collected can fill up a shield on it’s own.

Bally Technologies slots often feature something a little different and in this case it’s the frozen wilds during the free spins. The RTP of 94.00% is perhaps a little low but the graphics are nice enough and on the whole this is worth a look.