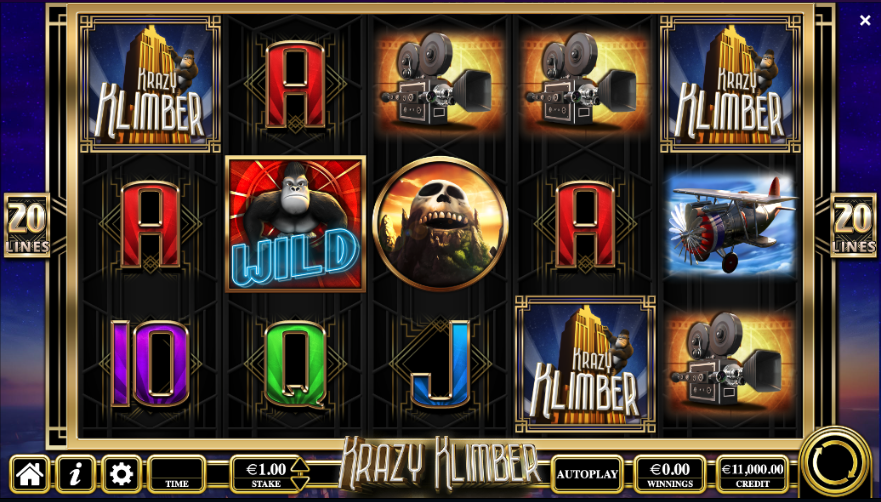 Captured from Skull Island and brought to New York for the entertainment of the locals, King Kong endures to this day as the gigantic anti-hero of a famous tale; Krazy Klimber is an online slot from Yggdrasil Gaming/Reflex Gaming based on this creature and from £0.20 per spin it tempts players with the Climb feature leading to potential free spins.

Krazy Klimber is a five reel slot with three rows and twenty fixed paylines; there’s an Art Deco period design to this game and behind those golden reels searchlights sweep across the night sky.

High value symbols include the skyscraper, the biplane, Skull Mountain, Ann Darrow and a television camera; 10, J, Q, K and A make up the lower values. King Kong is wild and the special symbol is the purple Kong ‘Bonus’.

This is triggered by landing the Kong bonus symbol anywhere on reels one, three and five and an animation will begin in which King Kong will climb the skyscraper; he’ll eventually stop on a cash prize of up to 1000x the bet or free spins.

Either ten or twenty free spins will be awarded depending on where Kong stops and during this round Super Wilds will appear on each spin; Super Wilds appear on reels two, three and four and will turn all positions there wild. It’s not possible to trigger any more spins from within this feature.

Krazy Klimber is an enjoyable enough outing into cinematic history and it certainly benefits from a bonus feature themed on the most famous scene from the original film; the luckier players will see Kong climb to the top for the biggest prizes.

The Return To Player percentage for Oliver Twist is 96.06%.

How To Win On Krazy Klimber?

Where can I play Krazy Klimber?